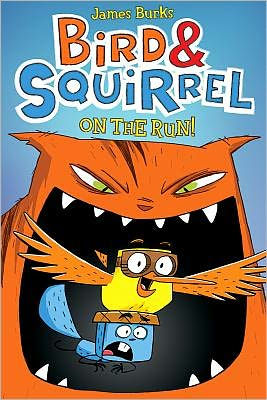 Squirrel is busy preparing for winter. He’s collected and stored enough acorns to last him through spring. Meanwhile, Bird is enjoying riding the air currents. When Bird invites Squirrel to go south with him, Squirrel isn’t interested. But when Cat decides that he’d like nothing better than to eat Bird for lunch, Squirrel jumps to the rescue. Unfortunately, he also loses all of his acorns. With his winter supply of food gone, Squirrel reluctantly decides to head south with Bird. Cat sneakily follows, waiting for a perfect opportunity to make Bird his lunch.

Filled with cat chases, misfortune, and other drama, Bird’s and Squirrel’s adventure is pure fun. The two friends are comically different. Every time something bad happens, Squirrel is convinced that “We’re gonna die!” On the other hand, Bird looks on the bright side of everything. When all of their possessions are lost, Bird holds up a toothbrush and says, “Look on the bright side, we still have your toothbrush.” The interplay between Bird and Squirrel will make readers laugh out loud.

Bird and Squirrel’s adventure is reminiscent of Tom and Jerry. Every time Cat tries to sneak up and eat Bird, Cat ends up being injured in some way. As Bird and Squirrel try to avoid Cat, they run into a funny family of moles, a raging river, a slimy snake, and other misfortunes. Even though Bird & Squirrel on the Run is full of slapstick humor, the graphic novel also teaches the importance of friendship and working together.

The story is illustrated with brightly colored panels. Much like a cartoon, the illustrations use exaggerated facial expressions to add to the humor. Each page contains one to six simple sentences. Bird & Squirrel on the Run will appeal to even the most reluctant readers. Bird and Squirrel’s silly antics will keep readers interested as it teaches the importance of enjoying life, even if you’re being chased by a cat. Readers who want more animal mischief should read the Pets on the Loose Series by Victoria Jamieson.