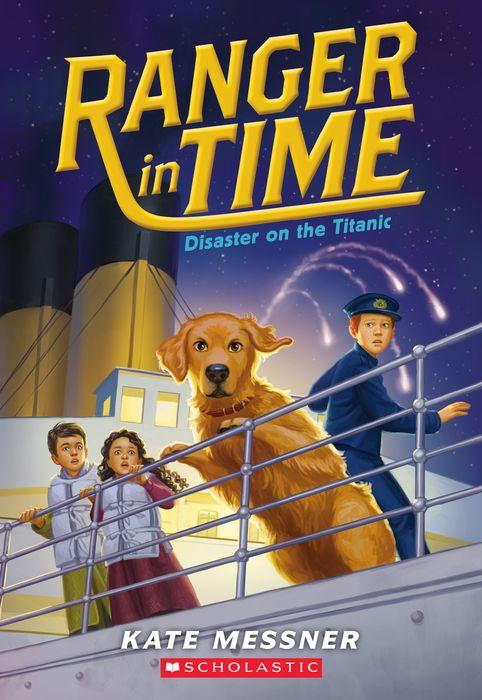 Ranger, the time-traveling golden retriever with search-and-rescue training, finds himself in 1912 on the Titanic!

Everyone says the Titanic is unsinkable, and Patrick Murphy believes this most of all. He grew up near the shipyard where the magnificent ship was built and started working there when he turned thirteen. Then he was chosen to be part of the crew during the Titanic’s maiden voyage! Ranger meets Patrick before the ship sets sail, and once on board they befriend Maryam and Hamad. But one night, the ship hits an iceberg and starts to take on water. It’s a race against time, and Ranger and his friends must help get as many passengers as possible—including themselves—off the ship before it’s too late.

Even though Ranger helps people in dangerous situations, he has a playful disposition and likes to chase squirrels. While on the Titanic, Ranger wasn’t sure how to help the passengers of the Titanic, but he nuzzled some of the most frightened passengers. Ranger thought, “When you couldn’t fix a problem, you could at least let a person know you were there.”

Even though the sinking of the Titanic is told in kid-friendly language, the story doesn’t skip over the horrible events. For example, some men snuck onto the lifeboats instead of allowing a woman or child to take the spot. In addition, after the Titanic sunk, many of the people in lifeboats were leery about helping passengers who were in the water. They didn’t try to help others even though their boat had room for more passengers. One group refused to help because “there are hundreds of people in the water. What if they swamp the boat?”

Disaster on the Titanic is an entertaining and educational story that has a unique perspective because it focuses on a golden retriever. Ranger’s perspective adds some humor, but it also helps reduce some of the fear of the situation because he interprets fear from his scent. For example, when Ranger follows Patrick below deck, Ranger thinks, “With every flight of stairs they descended, the air smelled more dangerous. Like metal and seawater and ice.”

Readers interested in the Titanic will enjoy Disaster on the Titanic, which has full-page, black-and-white illustrations approximately every six pages. Even though Ranger’s story is fictional, facts are woven into the story. The end of the book has more information about the Titanic as well as a list of further resources. Readers who want to read more about the Titanic should also read I Survived the Sinking of the Titanic, 1912 by Lauren Tarshis. For readers who love jumping back into time, the Time Jumpers Series by Wendy Mass would also be worth the read.