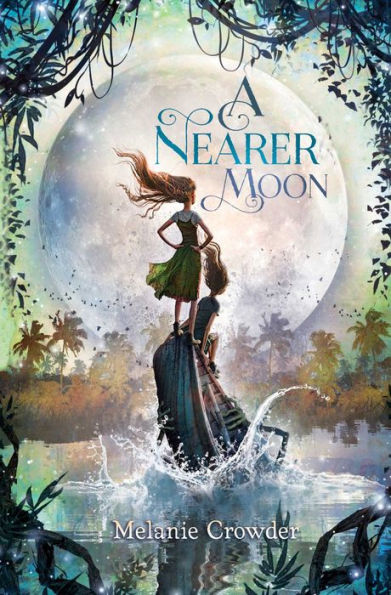 “But sorrow can spread inside a person, blocking out any light that might find its way in to heal the hidden hurts.”  –A Nearer Moon

Luna’s world revolves around her little sister, Willow. Willow is happiness and sunshine, and she brings the family together. When Willow becomes sick with the mysterious river sickness, everyone tells Luna there is no way to save her sister. They say she will be dead in three weeks. Luna refuses to sit by her sister’s side and watch her die. Luna and her friend Benny embark on a series of adventures to find a cure for Willow.

Interwoven into Luna’s story is the story of Perdita, a spunky river sprite. The fairies moved to a new world, far from humans. But in a devastating twist of fate, Perdita was left behind when the fairies went through the magical door to a new home. All alone, Perdita flees to the bottom of a swamp and hates anything that shows joy.

Luna offers herself to Perdita in exchange for Willow’s life. Luna hopes the sprite can save Willow but has Perdita’s grief made her blind to others’ needs? Can Perdita find hope again?

A Nearer Moon is a beautifully written story about the love of sisters. The parallel stories about Luna and Perdita add interest. Luna is a plucky character who younger readers will love. The story has beautiful, vivid descriptions of Luna’s world. The only downside to this story are the long descriptions that slow the action.

“But sorrow can spread inside a person, blocking out any light that might find its way in to heal the hidden hurts.”  –A Nearer Moon