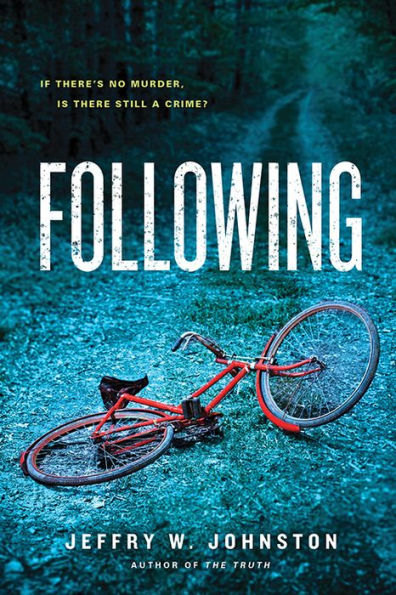 “Following is fascinating and daring and sometimes a little dangerous. . . You never know about people; what they show on the outside is often not what’s on the inside. You’ve gotta watch for those brief moments when the hidden part slips out,” Alden. –Following

Alden likes to follow people, especially his high school classmates. He’s not trying to be a creep—he wants to be an investigator! Following others is a good way to practice the skills he will need. Alden tries spying on his classmates for practice, but he isn’t expecting to find any dark, dangerous secrets.

That all changes when he follows the popular kid Greg Matthes to an abandoned park on the bad side of town. From a distance, Alden sees Greg kill his girlfriend, Amy. Alden soon finds himself looking for evidence to prove that Greg is a murderer. But the more he searches, the more questions Alden must answer. Without a body, Alden isn’t sure if Amy is dead or alive. Is there any way for Alden to discover Greg’s secrets or will he become the next victim?

Alden is a complicated, creepy character with a host of problems. Both of his parents were shot and killed in front of him. Filled with grief and guilt over his parent’s death, Alden hopes to one day use his investigative skills to save someone’s life. Told from Alden’s point of view, Following flashes back to the day that Alden’s parents died. Although the death of Alden’s parents helps explain his actions, Alden’s snooping is disturbing. Readers will often wonder why Alden makes such bad decisions when it comes to solving the crime.

Alden’s best friend Charlie is also not a very relatable character. Charlie helps Alden with his investigation because she likes taking risks. Because Charlie’s father is a police officer, her willingness to help Alden investigate a murder doesn’t quite ring true. Charlie clearly has a good relationship with her father, but she chooses to keep important information from him. At one point, Charlie decides that she needs space from Alden and ignores him. Unfortunately, Charlie isn’t the greatest friend, and she doesn’t add much to the story.

Even though Following is not a character-driven story, the mystery behind Amy’s murder will keep readers hooked. The dramatic conclusion contains several twists but leaves many unanswered questions. Although Alden isn’t the most likable character, he does learn that “we make decisions every day and often we don’t know the full consequences of those decisions until later. Maybe the key is to keep trying to do the best we can. If we can teach ourselves to do that, maybe it’ll make it easier to live with our choices. And their consequences.” This fast-paced story will keep readers guessing until the very end. Following will entertain mystery buffs who enjoy trying to piece clues together.

“Following is fascinating and daring and sometimes a little dangerous. . . You never know about people; what they show on the outside is often not what’s on the inside. You’ve gotta watch for those brief moments when the hidden part slips out,” Alden. –Following