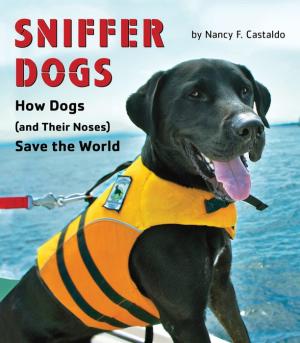 Sniffer Dogs: How Dogs (and Their Noses) Save the World

Did you know that a dog’s nose is so sensitive that if a human could see as well as a dog could smell, we could be able to see the small letters on an eye chart from four miles away? While your dog may be talented at sniffing out snacks or alerting your family to welcome (or unwelcome) visitors, some dogs are super sniffers who put their noses to work with firefighters, soldiers, and scientists to save lives. These knowing noses can help locate missing people, detect explosives, or even sniff out a tiny, endangered snail species in the middle of a huge forest.

Dog lover and acclaimed science writer, Nancy Castaldo, introduces us to these heroic canines, many of whom were death-row shelter dogs. There’s Cairo, a Belgian Malinois, who is a decorated war hero; Rocky, the German shepherd who wears a bulletproof vest while sniffing for illegal drugs; Alan, a fox red Labrador retriever who detects tiny but life-threatening changes in his owner’s blood sugar levels; and Raider, who searches for disaster victims in piles of rubble. From your own very backyard to danger zones all over the world, hard-working dogs are on the job helping humans every day—eager to please, hoping for love, and always on alert.

Readers will be amazed by the dog’s abilities to use their sense of smell to help people. Sniffer Dogs educates readers about the different jobs that dogs train for including sniffing for bombs, drugs, missing people, and human remains. Sniffer dogs are also used to help people with medical conditions like diabetes. Some Sniffer Dogs are trained specifically to find old bones. For example, “the ghost town, Bodie, was once the fifth-largest town in California in 1859. Today, dogs are locating the unmarked graves of Bodie’s past residents.” Incredibly, other dogs are also trained to help scientists find whale feces in the Atlantic Ocean which allows scientists to study the population of endangered whales.

The book explores the different ways dogs have helped people throughout history. In World War II, “sentries and patrol dogs assisted the troops in battle, and ambulance dogs transported first-aid supplies to wounded soldiers.” Readers who want to learn more about how military dogs have helped people should also read the G.I. Dogs Series by Laurie Calkhoven.

Sniffer Dog’s format will appeal to readers because of the large pictures that appear on almost every page. The book includes information on real Sniffer Dogs and gives specific information on how the dogs have helped. Readers will learn about the dogs’ training, their relationship with their handlers, as well as their incredible sense of smell. While the book is packed full of information, each section is broken into small, manageable sections. However, the advanced vocabulary may be difficult for struggling readers.

Sniffer Dogs will appeal to dog lovers as well as anyone who is interested in science. If you are researching any type of service dog, then Sniffer Dogs is a must-read. If you’re interested in learning more about how dogs are used in the military, grab a copy of Max: Best Friend. Hero. Marine. by Jennifer Li Shotz.