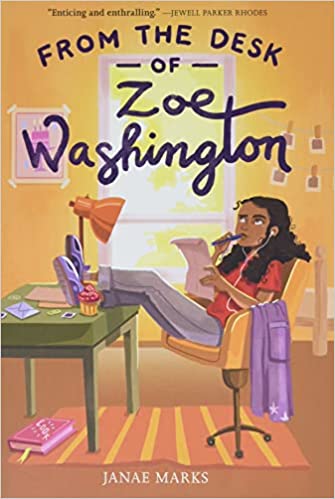 “They made Marcus sound so guilty, even though he said he was innocent. But Grandma said things aren’t as simple as black-and-white. What if the truth wasn’t either?” Zoe Washington. –From The Desk of Zoe Washington

Zoe Washington is a normal 12-year-old who is refusing to speak with her long-time best friend, Trevor. Her spiraling friendship with Trevor seems to be the most of her worries . . . until she checks the mail and sees a strange letter from the county prison. Could this be what she thinks it is? Is her long-lost father finally reaching out after all these years?

All Zoe knows about her birth father, Marcus, is that he is in prison after being convicted of murder. Zoe’s mother refuses to speak about Marcus and brushes off all of Zoe’s questions. After all, Zoe has a wonderful stepfather that has taken care of her since she was born, so what need is there for Marcus? But there is a need. Zoe wonders about Marcus. Does he like Hawaiian pizza too? Why did he refer to her as “Little Tomato?” Why is he telling her he is innocent? Innocent people didn’t go to prison . . . or did they?

For Zoe, Marcus’s letter brings up so many unanswered questions. Questions about who he is and what he did to end up in prison. But more than anything she can’t stop thinking, what if he is innocent? With each new letter and phone call, Zoe begins to piece together the clues of the crime that Marcus supposedly committed. The only problem is that nothing is adding up. Suddenly the answer seems so clear to Zoe; she needs to track down a mysterious witness to help prove Marcus’s alibi.

But tracking down the witness is harder than Zoe anticipated . . . especially when she must keep it a secret. So, Zoe enlists the help of none other than her ex-best friend, Trevor, to travel to Harvard University to find the witness. However, the day trip turns out worse than anticipated and Zoe ends up in big trouble. Worst of all, now that she is grounded, Marcus has no one searching for the woman who may be the answer to his freedom.

From the Desk of Zoe Washington is an inspiring story that showcases Zoe’s bravery. The plot emphasizes that even when life seems uncomplicated, it usually is anything but. The overlap between Zoe’s summer activities and her mission to prove her father’s innocence provides a delicious complexity to the storyline. The story takes a deep dive into Marcus’s conviction and the racial inequality of the justice system. The plot successfully educates the reader on wrongful convictions and racism, while maintaining a lighthearted nature that cuts the heavy feelings that can arise from such deeply serious topics. Even though the book delves into mature topics, it is not overwhelming. Instead, readers will find the story easy to understand.

Zoe is a likable and well-written character who matures throughout the novel. Her character development reinforces that it is not the amount of time you spend with someone that matters, but instead how you spend it with them. Zoe reminisces on this towards the end of the novel when she visits Marcus in prison. “I had no idea what would happen next, but I hoped with all of my heart that The Innocence Project would set Marcus free. In the meantime, I was so thankful I found his letter on my twelfth birthday, and that he was in my life now, where he belonged.”

While the story is intended for a younger audience, it still evokes a sense of realness within the plot and the characters. The roller coaster of emotions that Zoe goes through during her journey is easy for the reader to understand and admire. There are so many moments where the reader’s heart will reach out for Zoe. From The Desk of Zoe Washington focuses on themes such as having an unconventional family, social justice, and prison reform. The seamless, yet informative inclusion of social justice issues complements the kid-friendly nature of the novel, making it a must-read for those wanting to be gradually introduced to these topics. Middle-grade readers who want to explore other books about racial injustice should read A Good Kind of Trouble by Lisa Moore Ramé and I Am Alfonso Jones by Tony Medina.

“They made Marcus sound so guilty, even though he said he was innocent. But Grandma said things aren’t as simple as black-and-white. What if the truth wasn’t either?” Zoe Washington. –From The Desk of Zoe Washington