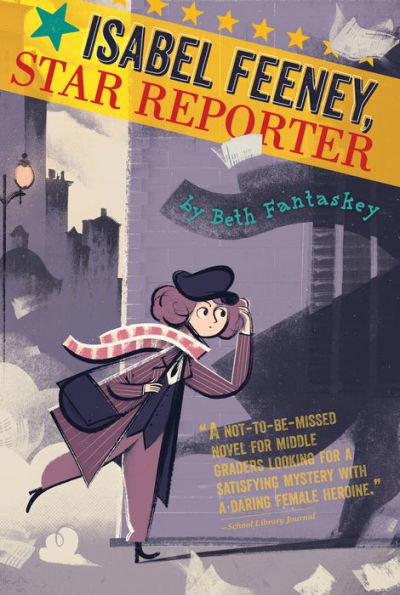 “I’m afraid that letting Isabel Feeney see the inside of a prison is the only way to possibly keep her out of one in the future,” Detective Culhane. –Isabel Feeney, Star Reporter

Isabel Feeney is one of the few newsgirls working in 1920s Chicago during the era of guns and gangsters. Every day, while she sells copies of the Tribune, she dreams of being a journalist like her hero, the famous crime reporter Maud Collier. So when Isabel stumbles upon a murder scene on her own street corner, she’s determined to solve the case.

Who murdered mobster Charles “The Bull” Bessemer? Was it his beautiful fiancée, Miss Giddings, whose fingerprints were found on the gun? A jealous husband? Or Bessemer’s associate, Al Capone? As Isabel tracks down clues, she finds herself working alongside Maude, who is covering the case.

But as Isabel gets closer to discovering who killed a gangster, someone becomes determined to silence her, too.

Readers will quickly fall in love with Isabel, who is intelligent, observant, and determined to solve the murder mystery. As Isabel follows the clues, she meets several possible suspects and her snooping often gets her into trouble. Along the way, Isabel meets two new friends, Flora and Robert. These friendships add interest because Flora’s family are gangsters, and Robert has a physical disability due to polio.

Even though the fast-paced story takes readers into the violent world of Chicago, none of the crimes are described in gory detail. Instead, Isabel’s journey focuses on finding the true killer by meeting the people in the prime suspect’s life. Isabelle’s new friends include the dead man’s daughter, a famous female reporter, and a police detective. As Isabel searches the city, readers will get a look at Murderess’s Row—a wing of the Cook County Jail.

Isabel Feeney, Star Reporter will appeal to both mystery and history fans. Despite Isabel’s good intentions, she often speaks without thinking and gets herself into potentially dangerous situations. As Isabel follows the clues, she writes them in a notebook, which helps the reader keep track of all the clues. Even though the story is written from Isabel’s point of view, all of the characters are uniquely interesting and well-developed. The conclusion wraps up all of the story threads and will leave the reader smiling. Readers who love a mystery that revolves around a plucky heroine should add The Friday Barnes Series by R.A. Spratt to their reading list.

“I’m afraid that letting Isabel Feeney see the inside of a prison is the only way to possibly keep her out of one in the future,” Detective Culhane. –Isabel Feeney, Star Reporter