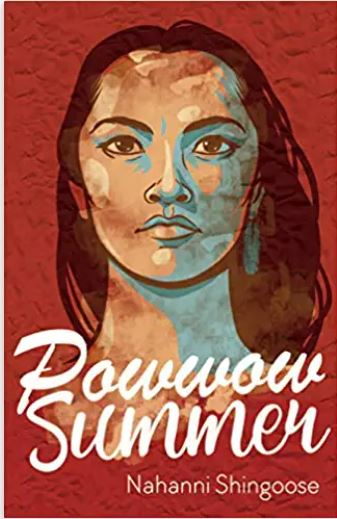 “It doesn’t matter where I live, or who I am with, or who my friends are. I know who I am,” River. –Powwow Summer

Part Ojibwe and part French, eighteen-year-old River lives on a farm with her mother and stepfather. After graduating high school, she looks forward to spending her last summer before university with her friends, but she struggles with her identity after years of racist bullying. On top of this, she must deal with doubts about her relationship with her boyfriend, as well as her stepfather’s violent tantrums.

When River’s mother reveals that she’s been seeing someone else, River supports her. But when River’s mother tells her that she wants them to leave in the dead of night and move in with her new boyfriend, River feels conflicted and angry. After a conversation with her mother turns heated, River buys a bus ticket to Calgary to stay with a friend. On the way, she is intercepted by a call from her dad, who invites her to stay with him instead. River agrees, and so begins a summer in the city with her father and grandmother, both of whom are Ojibwe. While staying with them, River learns about the lives of people in her community and grows especially close to her grandmother (or nokomis), Grace.

Over the summer, River encounters new situations. She joins a healing circle. She goes to her first bar with her dad and, later that night, her first North Side party. She learns about the intergenerational effects of residential schools and other issues facing the Ojibwe community. Eventually, River attends a powwow. At the afterparty, River gets drunk and witnesses a knife fight between two gang members. Not thinking straight, River takes pictures of the fight, including a selfie in front of it that prominently displays her red bandana. When she posts the pictures online, they go viral and the comments are filled with threats from people who interpreted her bandana as gang affiliation. River panics, takes down the photos, and asks her family for advice.

But the damage has already been done. While coming out of a convenience store, she is attacked by two girls who want to be initiated into a gang. Although she is terrified by this incident, River chooses not to press charges after hearing their experiences during another healing circle. Later on, she shares an especially profound moment with her grandmother while they gather birch bark. At the end of the summer, River returns home with a new sense of self and a plan to major in Indigenous Studies.

Powwow Summer is ultimately an uplifting story that centers around River’s experience of learning about and growing close to her culture. But the novel doesn’t shy away from the struggles that can come with being indigenous. A prologue at the beginning of the book details the racist bullying that River endured in grade school. While the story doesn’t linger on this, River alludes to the bullying in a conversation with her mother, where River recalls being singled out by a racist elementary school teacher.

Another issue that frequently pops up in the background of the story is the issue of missing and murdered indigenous women. River feels her heart sink when she observes a team of volunteers dragging the Red River in search of a missing woman. This comes up again when River attends a healing circle and hears one of the members talk about his cousin’s recent suspicious death. The family believes it may have been an overdose, but the police do not seem to care. It is even revealed that the two girls who jumped River only did so because they believe a gang will offer them protection from “perverts and Indian killers.”

Also looming over the narrative is the memory of residential schools, where River’s grandmother and others endured years of abuse. River grows especially close to her grandmother and wonders how she is able to remain so strong despite such hardships. These three issues are far from the only issues that Powwow Summer tries to tackle. The novel includes a wide range of issues in less than 200 pages, and at times the scope may be a little too broad. Readers may find the plot complicated, but the various threads are woven together skillfully.

Powwow Summer is told through both conventional chapters and River’s journal entries, which are usually one to two pages long. River is a likable character with believable struggles, but she also witnesses many other peoples’ struggles, and some readers may be disturbed by these intense scenes. Ultimately, Powwow Summer is a powerful story about identity headed up by a likable and well-developed main character. Powwow Summer is best suited for readers interested in historical fiction or who want to learn more about Ojibwe culture.

“It doesn’t matter where I live, or who I am with, or who my friends are. I know who I am,” River. –Powwow Summer