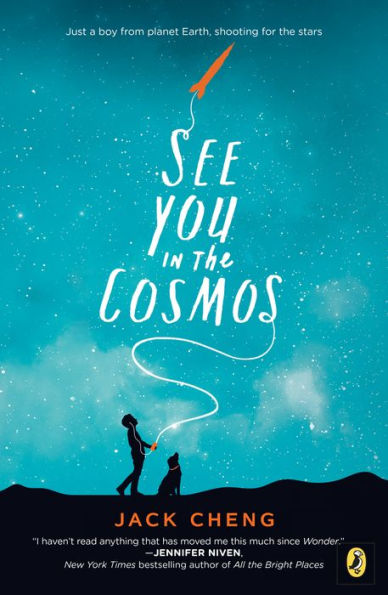 “If you’re only brave when you’re happy then it’s not bravery,” Zed. –See You in the Cosmos

Alex is a brilliant eleven-year-old, fascinated by space and astronomy. He has been working on building a rocket to launch his “Golden iPod” into space. After working at a local gas station sorting magazines in Rockview, Colorado, he saves enough money to attend SHARF, a rocket festival in Albuquerque, New Mexico.

On the way to SHARF, Alex meets Zeb who is an author that frequently meditates and has taken a vow of silence. By using a chalkboard to communicate, Zeb becomes friends with Alex and accompanies him to the rocket festival. On the day of the rocket launches, Alex’s rocket does not end up in space but crashes into the ground. While crying in disappointment, Alex is comforted by a fellow attendee who encourages Alex by telling him how his team went through many failures before finally succeeding. Alex learns, “Right now is the most important moment – how they react to failure. They could either let it stop them or they could redouble their efforts, figure out what went wrong, and fix their mistakes so they can make the next try a success.”

From Colorado to New Mexico, Las Vegas to L.A., Alex records a journey on his iPod to show other lifeforms what life on earth, his earth, is like. But his destination keeps changing. And the funny, lost, remarkable people he meets along the way can only partially prepare him for the secrets he’ll uncover—from the truth about his long-dead dad to the fact that, for a kid with a troubled mom and a mostly absent brother, he has way more family than he ever knew.

See You in the Cosmos is a heartbreaking and touching story of a child following his dreams and his unconditional love for his family. The story is told as a transcript of the recordings Alex makes on his “Golden iPod,” which he is determined to launch into space someday so extraterrestrials will know what life on Earth is like. The reader is given an opportunity to look at the world through the eyes of an eleven-year-old, which provides a new perspective on life’s challenging issues.

The novel follows Alex as he learns to cope with difficult family situations as a young child with a limited view of the world. Upon returning from his adventure, his mother gets diagnosed with schizophrenia, and Child Protective Services gets involved to determine Alex’s future. The reader forms an emotional connection to Alex, feeling empathy for the experiences Alex is facing while providing the reader a deeper understanding of how children interpret life’s events.

See You in the Cosmos provides an innovative story that will pull at the hearts of readers of all ages. Younger readers may miss the deeper meanings behind Alex’s journey. However, since this book is told from the perspective of an eleven-year-old boy, this novel could serve as a new way for children to learn to cope with difficult situations in life or help children understand situations that others, such as classmates, might be going through. This book will teach readers how to be themselves, what it means to be brave, and how to follow your big dreams.

“If you’re only brave when you’re happy then it’s not bravery,” Zed. –See You in the Cosmos