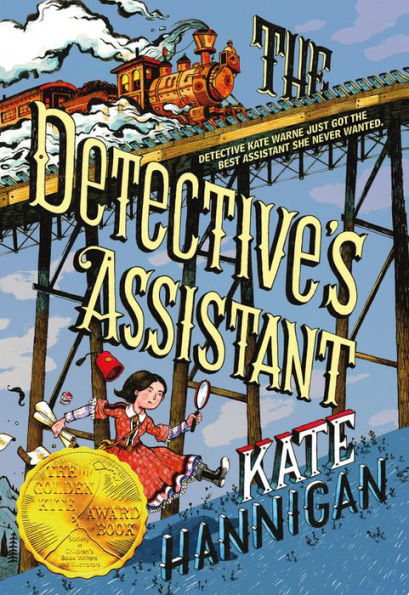 Other books by Kate Hannigan

“I apologize if the truth hurts, but let’s face it: family is something you make; it is the people you choose to be with. Not the ones you’re stuck with,” Aunt Kate. –The Detective’s Assistant

Eleven-year-old Nell Warne couldn’t have imagined what awaits her when she arrives on her long-lost aunt’s doorstep lugging a heavy sack of sorrows.

Much to Nell’s surprise, her aunt is a detective, working for the world-famous Pinkreluctanceational Detective Agency! Nell quickly makes herself indispensable to Aunt Kate. . . and not just by helping out with household chores. As her aunt travels around the country solving mysteries, Nell must crack codes, wear disguises, and spy on nefarious criminals.

Nation-changing events simmer in the background as Abraham Lincoln heads for the White House, and Aunt Kate is working on the biggest case of her life. But Nell is quietly working a case of her own: the mystery of what happened the night her best friend left town.

Nell’s adventure paints a picture of life in the 1800s. When she is forced to live with her Aunt Kate, Nell quickly realizes that her aunt isn’t like most women—instead Aunt Kate takes on many disguises while solving mysteries. At first, Aunt Kate doesn’t trust Nell and doesn’t want to give the grieving girl a home, giving readers a small peek into the life of an orphan. The Detective’s Assistant also uses letters between Nell and her friend to delve into the topic of slave hunters. Even though the topic is explored in a kid-friendly manner, sensitive readers may be upset by the death of so many people.

Despite her aunt’s reluctance to give Nell a home, Aunt Kate makes sure Nell learns vocabulary, grammar, and math. Throughout the story, Aunt Kate is always correcting Nell’s speech. For example, Aunt Kate tells Nell, “And the proper word is isn’t, not ain’t. Mind your grammar, even in times of distress.” Nell also learns new vocabulary such as somnambulist. This highlights the importance of getting an education and adds fun to the story.

The Detective’s Assistant is sure to delight readers because of the interesting, complex characters as well as the cases that Aunt Kate and Nell help solve. Since the story is told from Nell’s point of view, the readers get an intimate look at Nell’s emotions. Nell struggles with the death of her family, how the slave trade affected people, and the possibility of being sent to an orphanage. All of these aspects make The Detective’s Assistant a fast-paced story with many surprises. In the end, Nell learns that “family meant taking the folks we’re stuck with and choosing to love them anyway.”

Other books by Kate Hannigan

“I apologize if the truth hurts, but let’s face it: family is something you make; it is the people you choose to be with. Not the ones you’re stuck with,” Aunt Kate. –The Detective’s Assistant