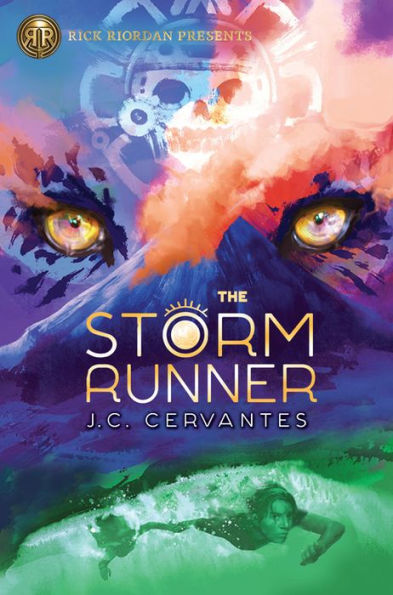 Other books by J.C. Cervantes

“A mother’s love is the most illogical of all types of love. If she knew, she’d do anything to protect you, and that could end up backfiring—on her, you, and the world,” Ms. Cab. –The Storm Runner

Zane keeps to himself because other kids tend to tease him about his limp and because he walks with a cane. But he doesn’t mind, because he spends his days exploring a nearby sleeping volcano with his dog. One evening, as Zane is exploring the volcano, a plane with twin engines crashes. Even stranger, as the plane was going down, Zane thought he saw a monster in the cockpit.

Things get more complicated when a girl named Brooks shows up demanding that Zane meet her at the volcano. Zane follows the beautiful girl who leads Zane down a twisted path. Soon Zane is running from monsters controlled by the Maya god of death. According to an ancient prophecy, Zane’s decisions may allow the god of death to escape a prison that is centuries old.

Zane soon realizes that magic, monsters, and Maya gods are more than just fables. In a web of secrets, the Gods are trying to manipulate Zane to their own advantage. Zane tries to do what is right, but what does a flawed eleven-year-old boy know about stopping the destruction of the world? In a battle against good and evil, is there any way Zane can win against a Maya god?

The Storm Runner brings the magic of Maya mythology to life in a fast-paced, action-packed story that will leave readers wondering who can be trusted. Despite being self-conscious about it, Zane doesn’t let his disability deter him from trying to save the world. Although some of Zane’s decisions are questionable, his imperfections make him a truly relatable character.

Zane is not the only well-developed character; the story contains a cast of interesting characters including giants, demi-gods, and even an overprotective mother. The Storm Runner is perfect for fans of the Percy Jackson series or Aru Shah and the End of Time. However, Zane’s story takes a more serious tone and lacks the humor of the other series.

The Storm Runner contains elements common to other mythological fantasy books—for instance, a boy discovers that his father is a god and must travel to strange places in order to save the world. Despite these similarities, this story effectively brings Maya mythology to life through an exciting series of events.

The length of the story, the complicated plot, and the extensive cast of characters may be overwhelming for some readers. The first third of the story introduces a lot of people, gods, and situations that cause the pace to drag. Despite a slow start, the monsters, the magical creatures, and the relationship between the characters make The Storm Runner an exciting adventure well worth reading. Readers will root for Zane as he fights evil, and they will pull their hair in frustration as Zane makes well-intentioned, but stupid decisions. In the end, readers come away with the powerful message that a person’s flaws don’t define them.

Other books by J.C. Cervantes

“A mother’s love is the most illogical of all types of love. If she knew, she’d do anything to protect you, and that could end up backfiring—on her, you, and the world,” Ms. Cab. –The Storm Runner