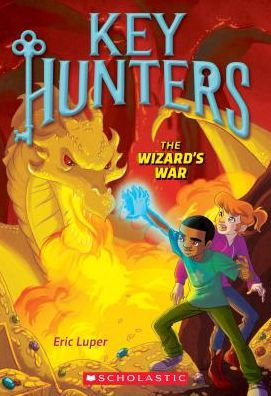 “We’re not going to be worm food. We’re going to be heroes,” Evan said. “That’s what all worm food says before it becomes worm food,” Devline —The Wizard’s War

When Evan and Cleo jump into a book, they find themselves thrust into a quest to save the kingdom. In order to save the kingdom, they will have to fight elves, trolls, and the mighty Golden Dragon. Danger comes from many places, and the two are not sure who they can trust. Only magic will end the war, but will it help them find the right key and return home?

This fast-paced fantasy contains many fantastical creatures that will enthrall younger readers. Danger lurks around every corner, which keeps the suspense high throughout the entire story. When Evan and Cleo meet the manticores, there are several fun riddles that readers can try to solve. Because of some overlapping plot points, The Wizard’s War should be read after the first two books of the series.

Throughout the story, Evan and Cloe show their bravery, brains, and devotion to each other. Working together to defeat evil is the main theme of the story. King Ledipus’s words reinforce this theme when he says, “Today we start a new chapter in the world, one where all creatures—humans, elves, manticores, dwarves, dragons, and even trolls—live in harmony. We will work together to build a future where all can find happiness.”

The story contains a lot of dialogue and short descriptions that help keep the story interesting. A full-page illustration appears in every chapter. The story contains magic wands and magic spells, which are clearly fantasy and not part of the real world. The Wizard’s War will be a hit with readers looking to take a trip into another world. The ending contains a cliffhanger that will leave readers reaching for the next book of the series—The Titanic Treasure.

“We’re not going to be worm food. We’re going to be heroes,” Evan said. “That’s what all worm food says before it becomes worm food,” Devline —The Wizard’s War