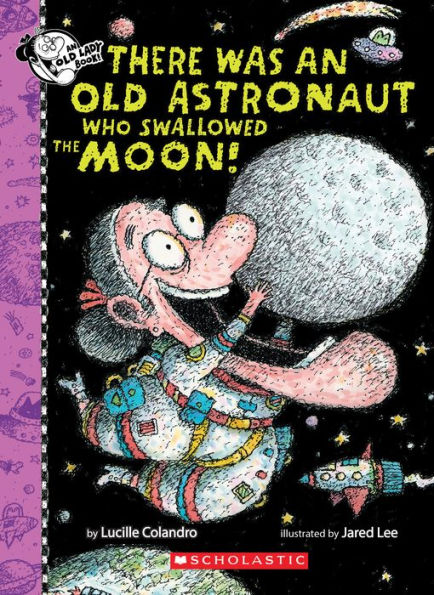 In this space-themed Old Lady Book, an old astronaut takes off into space and “swallowed the moon. I don’t know why she swallowed the moon, it happened at noon.” In between the old lady swallowing different space objects, two characters ask and answer space questions. For example, a girl asks, “How does the moon stay in the sky?” Her friend answers, “Gravity’s force keeps it up high.”

The only positive aspect of the story is that it teaches some space facts. The end of the book has two pages of space facts and the illustrations contain hidden objects. Unlike The Old Lady Who Swallowed the Fly, There Was An Old Astronaut Who Swallowed the Moon doesn’t have the same silly rhyme scheme that gives the words a fun flow. While the space facts are interesting, they are oddly placed and they break up the rhyme and repetition.

The story is illustrated with bright colors on top of space’s blackness. The illustrations have the same grainy aspect as a chalkboard. Some of the illustrations are funny, but others leave the reader wondering how the old astronaut swallows a comet, a rocket, and still has room for a satellite. In the end, the reader finds out that the old astronaut is actually in a planetarium and was only pretending to swallow the space objects. However, instead of being humorous, the ending falls flat.

There Was An Old Astronaut Who Swallowed the Moon is a picture book with 1 to 2 sentences per page. However, the story is not intended for children to read it for the first time independently. Younger readers may enjoy the story’s silliness, but parents may want to leave this Old Woman Book on the shelf. Unfortunately, the lack of rhyming, the odd illustrations, and the space facts do not blend well together.