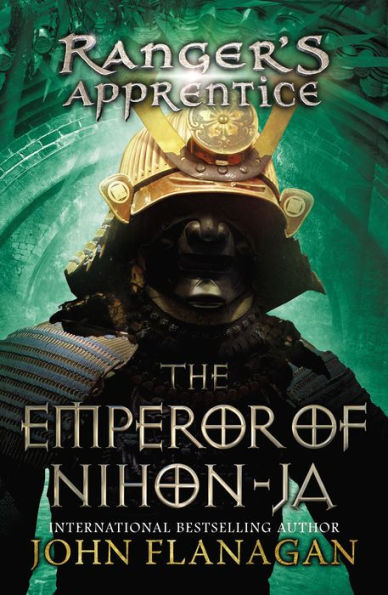 When Horace travels to the exotic land of Nihon-Ja, it isn’t long before he finds himself pulled into a battle that is not his—but one he knows in his heart he must wage. A kingdom teeters on the edge of chaos when the Nihon-Ja Emperor, a defender of the common man, is forcibly overthrown. Only Horace, Will, and his Araluen companions can restore the Emperor to the throne. Victory lies in the hands of an inexperienced group of fighters, and it’s anybody’s guess who will make the journey home to Araluen.

In the last book of the series, The Emperor of Nihon-Ja brings many of the characters from previous books together. The story follows the same format as the other books, ending with an epic battle. The Emperor of Nihon-Ja teaches that all men have value and that each person has a unique skill. Even though not everyone is able to be a warrior, everyone is important—diplomats, soldiers, attorneys, and the common man. Hoping to overthrow the Emperor, Ariska forms a rebel army and his brutal ways are in stark contrast with the Emperor, who is “kind and honest and incredibly courageous. He’s trying to better the lot of the common people here and give them a bigger say in things.”

Alyss and Evalyn also play an integral part in the battle. The two women are never seen as silly maidens. Instead, they are courageous, brave, and imaginative. Even though the two girls do not get along, they are able to put their differences aside and work together for the greater good. In the end, the girls discuss their conflicts, which allows them to understand each other and finally become friends.

The Ranger’s Apprentice series reinforces the importance of friendship, loyalty, courage, and imagination. Even though most of the books have the same format, each story is unique and interesting. The Emperor of Nihon-Ja shows that a ruler’s strength does not come from brute force. Instead, a ruler is “a man who would forsake the highest position in the land to save the lives of his subjects.” Even though many of the characters are from different countries and have completely different cultures, they respect each other’s cultures and do not expect others to change.

The Emperor of Nihon-Ja concludes the Ranger Apprentice series. The series is a fast-paced and entertaining series that also has positive lessons. By the end of the series, readers will feel like Halt, Horace, and Will are their friends. For readers looking for another great series to enjoy, the Protector of the Small series by Tamora Pierce would make an excellent addition to your reading list because the story contains action, adventures, and knights.