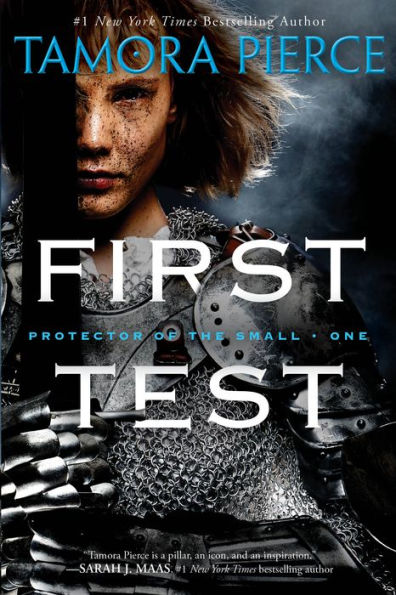 “You understand that you are here on sufferance. You have a year in which to prove that you can keep up with the boys. If you do not satisfy me on that count, you will go home,” Lord Wyldon.  –First Test

Protector of the Small #1

Keladry of Mindelan dreams of becoming a lady knight. A generation ago, that would not have been possible. But ten years ago, the King announced that ladies could try for their knighthood. In the decade since, no girl has dared to try. Until now.

Kel knows becoming a knight will not be easy. Years of hard training and study lie between Kel and her dream. But that’s not all. Kel did not know she would be placed on probation—something no boy has ever endured. And she did not realize how much resistance she would meet. Knights don’t think she is strong enough, her trainer does not think women should be knights, and the other trainees are determined to drive her away.

A delightful start to the Protector of the Small Quartet, First Test is a thoroughly enjoyable read. Kel is a brave and kind soul that readers will fall in love with. The other characters in this book are also refreshingly well-developed, from her training master and friends, to her enemies and even her horse. Protector of the Small is an enjoyable story filled to the brim with equal parts fun and excitement. It teaches readers how to be a true knight—how to be honorable, selfless, brave, and to always protect those who are weaker than yourself.

Kel wants to fight, but she’s not interested in glory. She wants to use her shield to protect those who can’t protect themselves. Unlike many female heroines, Kel doesn’t disguise herself as a boy or throw temper tantrums. Instead, she uses quiet determination and her intelligence to overcome obstacles. Kel’s story touches on themes of friendship, bravery, and shows the importance of not bullying others.

Several characters from the Song of the Lioness series appear throughout The Protector of the Small series, which will be a treat for fans of Alanna. However, readers do not have to read the Song of the Lioness series first in order to understand this series. Jump into a medieval world where fantasy and action combine to create a girl-centered adventure that will keep readers turning the pages until the very end.

“You understand that you are here on sufferance. You have a year in which to prove that you can keep up with the boys. If you do not satisfy me on that count, you will go home,” Lord Wyldon.  –First Test