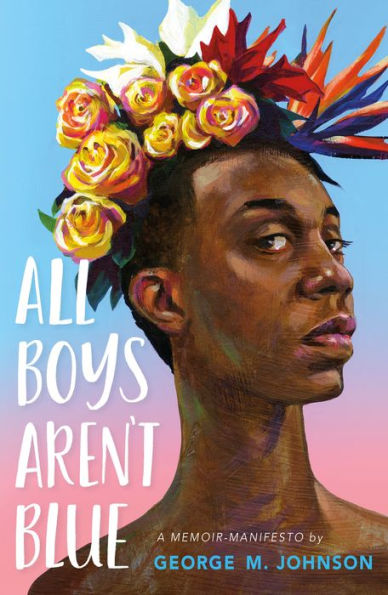 “Be bold and brave and queer,” George Johnson. –All Boys Aren’t Blue

All Boys Aren’t Blue: A Memoir-Manifesto

George Johnson grew up as a queer Black man. In his memoir All Boys Aren’t Blue, Johnson reflects on the ways that the intersection of these two identities influenced his childhood, adolescence, and college experiences. Johnson discusses being jumped as a small child, ridiculed at school for being too feminine, being sexually assaulted, and finally accepting his intersecting identities. He also describes the support his family provided for him through these difficult times. Johnson does not brush over any details in this raw memoir.

All Boys Aren’t Blue is presented as a series of essays about various experiences Johnson faced throughout his life. In the first section of the book, Johnson considers his childhood and how being different made growing up difficult. Johnson writes, “When you are a child that is different, there always seems to be ‘something.’ You can’t switch, you can’t say that, you can’t act this way, there is always something that must be erased – and with it, a piece of you. The fear of being that vulnerable again outweighs the happiness that comes with being who you are, and so you agree to erase that something.”

Next, Johnson describes the important familial relationships that helped him grow into himself. He emphasizes his relationship with his grandmother, who made sure he felt safe being fully himself. Johnson’s collection of essays on his teenage years are painful because he is assaulted. Finally, Johnson concludes with his time in college. Even as he begins to fully embrace his identity as a gay black man, he still faced challenges, such as a friend’s suicide.

Johnson wrote his story as a memoir for young adults because he hoped his story would help others. Johnson stated, “This meant going to places and discussing some subjects that are often kept away from teens for fear of them being ‘too heavy.’ But the truth of the matter is, these things happened to me when I was a child, teenager, and young adult. So, as heavy as these subjects may be, it is necessary that they are not only told but also read by teens who may have to navigate many of these same experiences in their own lives.”

This memoir is powerful and heartbreaking. Johnson not only tells painful stories but also reflects on how the experiences still affect him. This book encourages young readers who face similar situations and lets them know they are not alone. All Boys Aren’t Blue is a must-read for any young adult who has gone through painful experiences. Johnson discusses sexual assault, queerness, existing as a black man, and losing his virginity as a gay man. He shares his coming-out story and the support his family provided. While All Boys Aren’t Blue is difficult to read because of the heavy topics, the book gives a voice to anyone who has been victimized by others and stigmatized by society.

“Be bold and brave and queer,” George Johnson. –All Boys Aren’t Blue