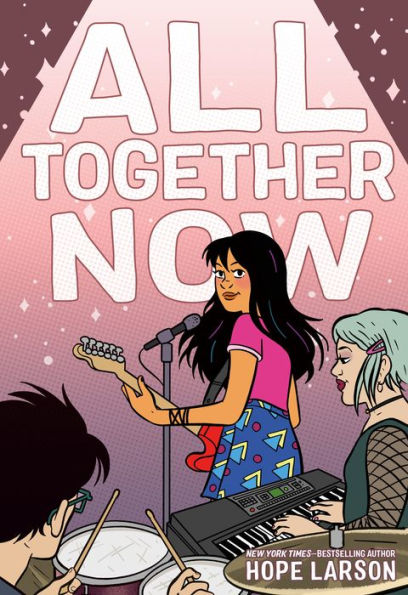 “The best revenge is doing something better,” Charlie –All Together Now

Bina and her friend Darcy love shredding the guitar and belting high notes together in their new band. All they need now is a drummer. When their classmate Enzo, volunteers, Bina is thrilled. That is until she realizes that sometimes two’s company and three’s a crowd.

To make matters worse, Bina’s best friend Austin has been acting strange ever since he and his girlfriend broke up. Is he interested in someone new? And is it. . . Bina?

Bina always thought she wanted a band, not a boyfriend. But now romance seems to swirl around her whether she likes it or not. Can she navigate its twists and turns before the lights come on and the music starts playing?

Anyone who is more interested in music than romance will relate to Bina, who isn’t ready to date. When Bina’s best friend decides that they should add a little romance to their relationship, Bina isn’t sure what to do. She doesn’t want to lose her best friend, but she’s not ready to start smooching him either. To add to her worries, Darcy and Enzo kick Bina out of the band that Bina started, and then they steal her songs!

All Together Now is told from Bina’s point of view, which allows her conflicting emotions to take center stage. Bina’s story highlights the importance of understanding yourself. When Bina is given an opportunity to play in front of a large audience, her mom says, “I know it’s scary to walk away from something you really want, but you have to ask yourself, ‘Is the timing right?’” In the end, Bina realizes that she’s not ready to date or perform. The book ends on a hopeful note that hints that one day, Bina will be ready for both.

All Together Now uses pink hues to illustrate the graphic novel panels. The easy-to-read story uses simple vocabulary and has eleven or fewer words on each page. The characters’ words appear in quote boxes, and the characters’ thoughts appear in arrows, which makes it easy to distinguish the two. The graphic novel format makes All Together Now a good choice for reluctant readers. Even though the book is the second installment of the Eagle Rock Series, each book can be read independently.

Readers will relate to the friendship conflict that dominates All Together Now. Even though Bina’s mother only makes a small appearance, her positive advice and encouragement helps Bina. In the end, Bina is able to make a mature decision based on her own needs. All Together Now explores the complicated nature of friendships in a teen-friendly way that shows that it is okay to go at your own pace.

“The best revenge is doing something better,” Charlie –All Together Now