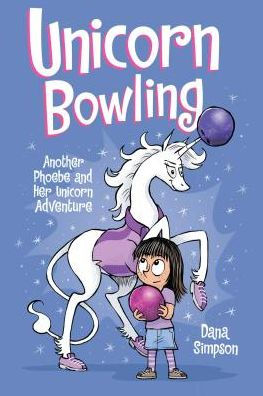 “I don’t have all that many friends. I’m not gonna limit myself to one gender,” Phoebe. –Another Phoebe and Her Unicorn Adventure: Unicorn Bowling

Another Phoebe and Her Unicorn Adventure: Unicorn Bowling

Phoebe and Her Unicorn #9

A unicorn in bowling shoes is quite a STRIKE-ing sight. But for nine-year-old Phoebe Howell, it’s just another fun outing with her best friend, the illustrious unicorn Marigold Heavenly Nostrils. This unique and magical friendship is at the heart of the ninth Phoebe and Her Unicorn collection, which includes adventures such as writing original songs, publishing rival news websites, and making a summer visit to the exclusive Camp Shimmerhorn. Life with a unicorn BFF is not without its challenges, however, and whether it’s homework, friction with classmates, or talent show jitters, Unicorn Bowling is full of amusing, heartwarming reminders that when the going gets tough, the tough get sparkling.

Unlike the previous installment of Phoebe and Her Unicorn, Unicorn Bowling is a collection of comics, not a continuous story. Some of the comic strips are only 4 panels, while others span multiple pages. The panels use simple artwork with bright colors. The character’s facial expressions will help younger readers understand the character’s emotions. Each page has six or fewer sentences and some panels contain no words at all, which makes the story accessible to reluctant readers. Some of the vocabulary is difficult such as culottes, conspicuous, cataclysmic, and libel. To aid readers, a word glossary appears at the back of the book.

Although Unicorn Bowling is a collection of comic strips, the situations lend themselves to discussions. Phoebe and her Unicorn deal with the dangers of posting online as well as the need to take other peoples’ feelings into consideration. The book also includes a comic about gender stereotypes. Younger readers will enjoy Phoebe and her Unicorn as they learn important life lessons. The humorous look at Phoebe’s everyday life as well as Phoebe’s friendship with Marigold will capture readers’ attention.

“I don’t have all that many friends. I’m not gonna limit myself to one gender,” Phoebe. –Another Phoebe and Her Unicorn Adventure: Unicorn Bowling