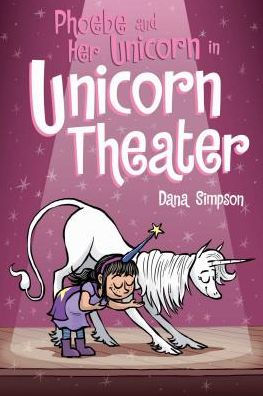 “Our friendship has made me see that not everything is about me,” Marigold. –Phoebe and Her Unicorn in Unicorn Theater

Phoebe and Her Unicorn in Unicorn Theater

Phoebe and Her Unicorn #8

Summer is here, and Phoebe and Marigold are heading to drama camp. Phoebe’s expecting some quality time with her best friend, but in a surprise twist, Marigold has invited her sister, Florence Unfortunate Nostrils! While the unicorn sisters head to camp in a magical rainbow pod, Phoebe is stuck riding with her parents in their boring car, wondering where it all went wrong. But at Camp Thespis, there are more daunting tasks at hand: writing, producing, and acting in an entirely original play! The second Phoebe and Her Unicorn graphic novel is a sparkling tale of sisterhood and summer fun, as well as a reminder that sometimes it takes a bit of drama to recognize true friendship.

Much of the humor revolves around Marigold, who is completely self-centered and obsessed with her own beauty. However, it is clear that Marigold cares about Phoebe. Based on the two friends’ relationships, readers will learn important lessons about friendship. In the end, Phoebe and some of her drama camp friends put on a play that highlights the importance of not being self-involved and not letting a fight go unresolved.

The easy-to-follow panels have simple artwork with bright colors. The character’s facial expressions will help younger readers understand the character’s emotions. Each page has six or fewer sentences and some panels contain no words at all, which makes the story accessible to reluctant readers. Both the vocabulary and the plot structure are easy to understand.

Anyone who has ever had a fight with a friend or who has felt socially awkward will relate to Phoebe. Phoebe and Her Unicorn in Unicorn Theater will be a hit with readers who want a humorous, fun story about friendships and unicorns.

“Our friendship has made me see that not everything is about me,” Marigold. –Phoebe and Her Unicorn in Unicorn Theater