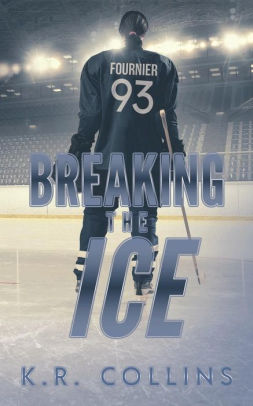 “She wants to fill their stadium with their own fans. She wants her team to get a standing ovation when the starting lineups are announced, and she wants their goals to be the ones celebrated. She wants to make this city hers,” -Sophie Fournier. —Breaking the Ice

Sophie Fournier’s first love is hockey. When she’s the first woman drafted into the North American Hockey League (NAHL), she finally gets her chance to play hockey for a living. But being the first woman in the NAHL means she has to be perfect on and off the ice in order to prove that women should have a shot at being drafted. Not meeting that perfection means no playing—not just for her—but for every woman wishing to play.

Breaking the Ice is a hockey-heavy book. Sophie’s love for the sport comes up often because it’s her career, and there are many scenes depicting games and practices. The story starts with Sophie being drafted and ends with the next year’s draft, leading the reader through her first season with the Concord Condors as she battles with opponents and some teammates. Although this story and Sophie are fictitious, most of the scenes are very realistic.

Sophie is a strong protagonist. She’s extremely intelligent and understands how the press and her teammates perceive her is very important to her survival as the first and only woman in the NAHL. Because Sophie is so well-controlled in her behavior, she does occasionally come off as aloof and uptight. As the story progresses, she begins to befriend her teammates and some of her icy exterior thaws. As she allows herself to open up, she becomes friends with some of the other characters, like her opponent Dmitri and teammate Merlin.

Sophie does have issues with a couple of teammates, opponents, and the press because she is a woman and many feel that she doesn’t have a place in the NAHL. Sophie takes these confrontations with as much grace as possible, and she pushes herself to be absolutely perfect on and off the ice. As this is the first book in the series, Sophie’s need for perfection as well as her character growth will most likely continue in the next books as her team vies for the Maple Cup. Sophie wants it all, like any serious athlete, and she’s working hard while knowing that her mark can help or hinder the next woman who wishes to be drafted and taken seriously.

Breaking the Ice has a steady pace throughout as it details Sophie’s first season with the Condors. As a result, those looking for a book with a very exciting ending probably will not find it here, though there is much excitement throughout. Sophie’s story is enlightening for hockey players as well as those who don’t know anything about the sport, and her dedication is admirable. Sophie has a lot of obstacles to overcome in Breaking the Ice, but readers will see she is more than up for the challenge.

“She wants to fill their stadium with their own fans. She wants her team to get a standing ovation when the starting lineups are announced, and she wants their goals to be the ones celebrated. She wants to make this city hers,” -Sophie Fournier. —Breaking the Ice