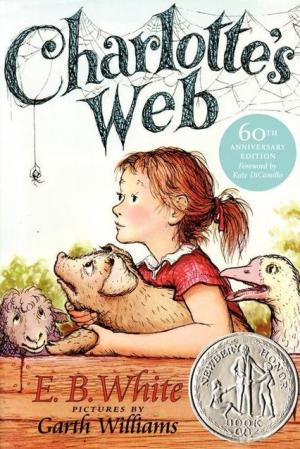 "You have been my friend. . . That in itself is a tremendous thing,” Charlotte. –Charlotte’s Web

Fern saves a piglet, the runt of his litter, from being killed by her father, Mr. Arable. She names the piglet Wilbur and cares for him until he has grown too big to stay at the Arables’ house. Her father is unwilling to provide for Wilbur, so he convinces Fern to sell Wilbur to her uncle, Mr. Zuckerman. Wilbur can stay at Mr. Zimmerman’s farm for the rest of his days. And although Wilbur has more room to move and plenty to eat, he becomes lonely—he wants a friend.

After hearing Wilbur’s request, Charlotte, a gray spider, befriends him. Fern frequently visits Wilbur and observes the activities around the barn, occasionally accompanied by her little brother, Avery. One day, a sheep warns Wilbur of an inevitable future: one of those days, the farmers will slaughter him for “smoked bacon and ham.” However, Charlotte plans to dissuade the humans from killing her new friend.

An external narrator tells the story of Charlotte’s Web so the reader can understand the thoughts of every character. Since the story centers on Wilbur’s growth from his friendship with Charlotte, who encourages him to be “some pig,” “humble,” and “radiant,” Wilbur is the only character who changes throughout the story. The narrator follows Wilbur’s actions often since Fern spends more time with the humans than the animals. Fern expresses her fondness for Wilbur, nonetheless. Younger readers will not get lost in the plot because Fern tells her family about the farm animals’ activities. In addition, pictures of the farm and characters are in most chapters so readers can visualize the setting.

Even though the story is a beloved classic, the frequent praise of Charlotte’s webs and Wilbur’s magnificence is heavy-handed at times. Plus, the book’s vocabulary will make it difficult reading for some readers. Younger readers may not understand the 1950s culture, but they will understand the relationship between Fern and the humans, and the friendship between Wilbur and Charlotte. The dialogue has 1950s dialogue, and some phrases and terms may be offensive to modern audiences. For example, when Mr. Zuckerman says to the minister that Fern is a “queer child,” he meant that Fern is a strange child.

Elementary school readers will enjoy the book as it ultimately tells the story of friends from unlikely places. If you are looking for a more modern story about love, life, and friendship similar to Charlotte’s Web, there are great ones to choose from, such as A Boy Called Bat by Elana K. Arnold and The One and Only Ivan by Katherine Applegate.

"You have been my friend. . . That in itself is a tremendous thing,” Charlotte. –Charlotte’s Web