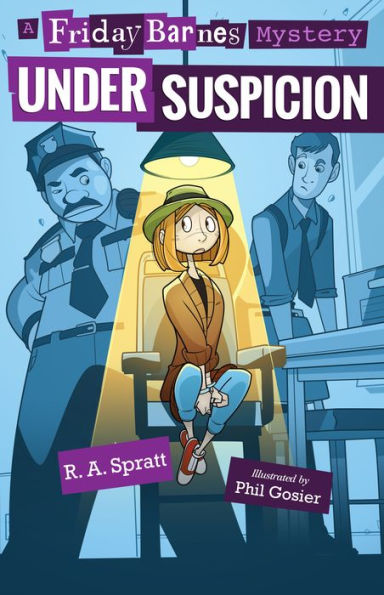 “‘You should make sure you enjoy every last moment of high school, then,’ said Friday. ‘It is the last place you’ll find where a person is scorned for caring about what they do and working hard to be good at it.’” – Friday Barnes Under Suspicion

When the police show up at Highcrest Academy, Friday isn’t expecting them to take her to the police station. She has to clear her name with the help of a vagrant she meets. Life is no easier once she gets back to school, as she quickly jumps in to investigate a quiche back-off scandal as well as discover why holes are being dug everywhere.

The second installment of the Friday Barnes mystery has many of the same characters. Friday’s best friend Melanie spends all of her time sleeping, skipping out on classes, and obsessing over Friday’s love interests. Melanie’s nemesis Ian is willing to do anything to earn a scholarship, even framing Friday for a crime she didn’t commit. Many of the characters are portrayed as rich kids who are willing to do anything, including lie and cheat, to win. Besides the cast of characters from the first series, cute boy Christopher makes an appearance, which gives Melanie another boy to tease Friday about.

Throughout the story, Friday focuses on several smaller mysteries that end up all coming together for a big reveal at the end of the story. Throughout the story, Friday uses her power of observation to solve mysteries. Although Friday is socially awkward, she is clearly a genius who isn’t afraid to show that she is smart. Friday understands her weaknesses, which include social interactions. Even though the girls at the school ignore her, she is still willing to help them when they are in need.

Black and white illustrations appear every 4 to 8 pages. The illustrations help bring the quirky characters to life as well as show some of the action in the story. Although the Friday Barnes Series does not need illustrations to get readers to turn the pages, they add a nice touch and are often humorous.

Unlike many children’s books, the Friday Barnes Series doesn’t shy away from larger vocabulary words. Friday is a genius, and her vocabulary includes words like laboriously, repugnant, extrapolate, and fastidious. Even though readers may not understand all of Friday’s references and words, this doesn’t take away from the book’s enjoyment. Friday’s curious personality jumps off the page. Even though the reader knows that she will solve every case, there are plenty of surprises. Friday Barnes Under Suspicion is the perfect mix of dry humor, action, and suspense.

“‘You should make sure you enjoy every last moment of high school, then,’ said Friday. ‘It is the last place you’ll find where a person is scorned for caring about what they do and working hard to be good at it.’” – Friday Barnes Under Suspicion