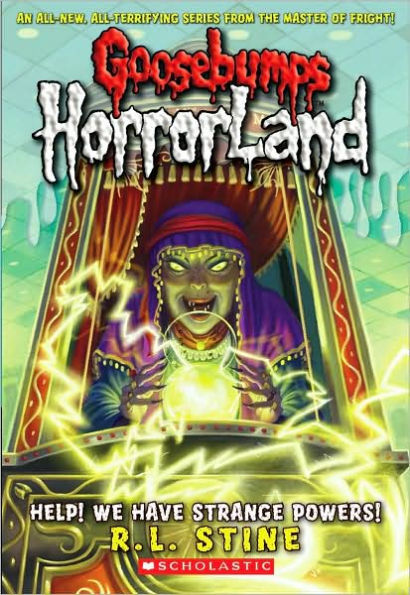 “Are we like superheroes now, Jackson? Or are we total freaks?” Jillian. Help! We Have Strange Powers

Help! We Have Strange Powers!

Jillian and Jackson are twins having a normal day at the movies until a fortune teller machine changes their lives by zapping them with superpowers. Now Jillian can read minds and Jackson can make objects levitate. The twins are excited to live their new lives as real-life superheroes, but what if superpowers come with super villains?

Scientist Dr. Cranium kidnaps the twins and takes them to a lab. Dr. Cranium wants to drain the twins not only of their powers but of their minds. The twins escape the lab by lying about their powers, but their troubles are not over. They eventually go to HorrorLand, and become trapped in a creepy theme park run by monsters. Will they be able to escape, or are they trapped in HorrorLand forever?

Help! We Have Strange Powers is the tenth book in the Goosebumps HorrorLand series. The first part of the story is interesting as it focuses on Jillian and Jackson’s new powers. However, once the twins are trapped in HorrorLand, the plot becomes confusing because the twins meet all of the characters from the previous books. This will be confusing for readers who have not read the previous books, as there is no explanation for what HorrorLand is or how Jillian and Jackson get there.

Help! We Have Strange Powers is told in the first person from Jillian’s perspective. In true R.L. Stine fashion, each chapter ends on a cliffhanger, making the reader want to continue with the book. Jillian and Jackson are not admirable, as they only use their powers for selfish reasons and to mess with others. The plot is not cohesive and it uses the typical Goosebumps elements. Even though the story is just average, fans of R.L. Stine will enjoy Help! We Have Strange Powers because it is an easy-to-read thriller.

“Are we like superheroes now, Jackson? Or are we total freaks?” Jillian. Help! We Have Strange Powers