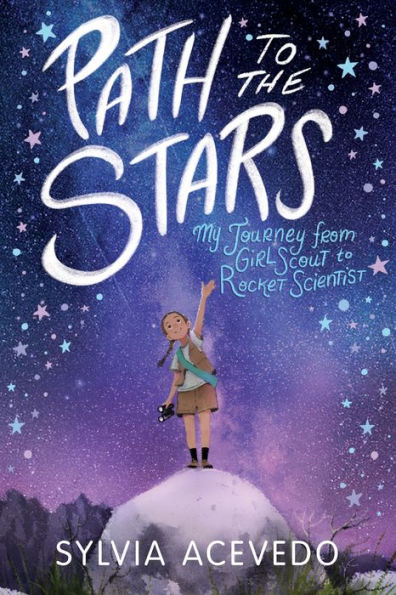 “We are each responsible for our own fate, and with help from others, we can achieve success if we plan well and work hard,” Sylvia. –Path to the Stars

Path to the Stars: My Journey from Girl Scout to Rocket Scientist

Sylvia is surrounded by family and friends. She lives in a close-knit neighborhood where everyone speaks Spanish. Sylvia loves her life because there are always other children to play with. Then Sylvia’s sister, Laura, gets really sick and everything changes.

Even though Laura recovers, she is never the same cheerful, inquisitive child she once was. Because of Laura’s illness, Sylvia’s mother decides to move the family to a more affluent neighborhood. Soon, Sylvia is forced to go to a new school – one where the majority of students are Anglo. Sylvia is miserable and self-conscious. When a classmate invites Sylvia to join Brownies, Sylvia finds a place to belong and learn. The Girl Scouts teach her the importance of planning for the future and creating opportunities for herself. Because of Girl Scouts, Sylvia knew “that I could teach myself to fulfill a goal and work as a member of a team. . . I had learned that planning ahead and doing things properly could help you get what you wanted.”

Sylvia’s family life is often chaotic, but with the lessons she learns from Girls Scouts, Sylvia gains the confidence to take control of her life. However, Sylvia has to battle cultural and gender expectations. Sylvia felt “pulled between different worlds: home and school, Spanish and English, traditional and modern.” This doesn’t stop her from planning, learning, and striving to better herself. Sylvia becomes the first Latinx to graduate with a master’s degree in engineering from Stanford University and one of the few female rocket scientists at NASA’s Jet Propulsion Laboratories. Now, Sylvia is the CEO of the Girl Scouts of the USA.

This true story is told by Sylvia herself. Even though she has to struggle to overcome many obstacles, she continues to work hard in order to reach her goals. Sylvia refuses to be defined by gender roles. For example, when she began high school, the school enrolled her in home economics. However, she refused to go to the class because she didn’t want to be a homemaker. The principal allowed her to take an additional math class instead. This helped prepare her for her future career at NASA.

The autobiography Path to the Stars will encourage readers to plan and strive for a better tomorrow. Through Sylvia’s story, readers will come to understand the importance of hard work. Even though Sylvia’s journey was difficult, she continued working to meet her goals. Even though Sylvia gained much of her knowledge through books, she also found other ways to learn. For instance, when her parents’ car kept breaking down because they did not maintain it properly, Sylvia took a class that taught women how to maintain a car. After that, she changed the oil in the car herself, even though she wasn’t yet old enough to drive.

“We are each responsible for our own fate, and with help from others, we can achieve success if we plan well and work hard,” Sylvia. –Path to the Stars