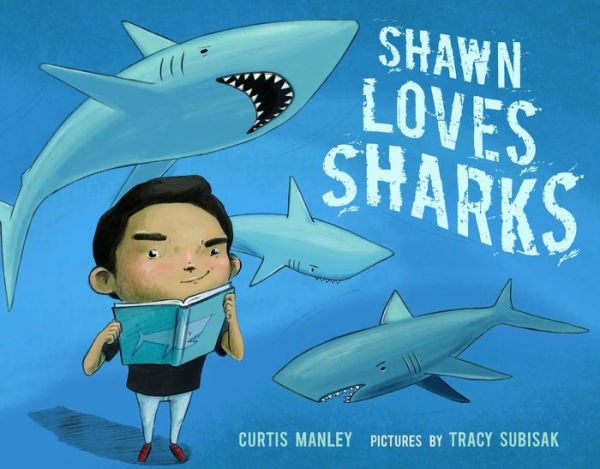 “And he knew that even a fast and clever seal could never be friends with a shark,” Sean. –Sean Loves Sharks

Sean loves sharks. He has 126 shark books, which have taught him a lot about ocean predators. Sean loves how sharks have a big mouth full of sharp teeth. Sean does not love his classmate Stacy. He loves to pretend to be a shark and chase Stacy around the playground.

Sean loves sharks more than anything else in the world. When his teacher announces that every student will do a report on a predator, Sean is excited write about the shark. But he isn’t assigned the Great White Shark. When Stacy begins researching sharks and acting like one at school, Sean turns mean. Is there any way sharks can bring Sean and Stacy together?

Young shark lovers will love Sean Loves Sharks. Although the story has shark facts, it is also about building new friendships and discovering new things. Sean acts like a shark as he goes through his day—he chops his food and pretends to chomp the cat and his classmates as he chases them. When Sean is forced to learn about seals, he is incredibly disappointed, but as he reads he learns that seals are actually really amazing.

At one point, Sean is really mean to Stacy. As he thinks about his behavior, he realizes that “he knew that even a fast and clever seal could never be friends with a shark.” The conclusion is absolutely, adorably wonderful and will lead to some great discussions between parents and their young readers. Readers will not only learn facts about sharks and seals, but will also learn about bullying, friendship, and being kind to others.

Besides being an entertaining story, Sean Loves Sharks also has beautiful, often funny, full-colored illustrations. The illustrations will put giggles into young readers because humor is often incorporated into the pictures. For example, Sean’s cat is dressed as a shark, and the students pretend to be predators. Another positive aspect of the illustrations is that they show diverse characters; Stacy has dark hair and slanted eyes; Sean has brown skin; the students in the classroom are also drawn showing different ethnicities.

Even though Sean Loves Sharks is a picture book, the story is intended to be read aloud to a child, rather than for the child to read it for the first time independently. The engaging story is fun to read aloud. Since there is little text on each page, the story is a quick read making it an excellent bedtime story. Sean Loves Sharks is not only an entertaining story containing ocean creature facts but also has a positive message about being kind to others.

“And he knew that even a fast and clever seal could never be friends with a shark,” Sean. –Sean Loves Sharks