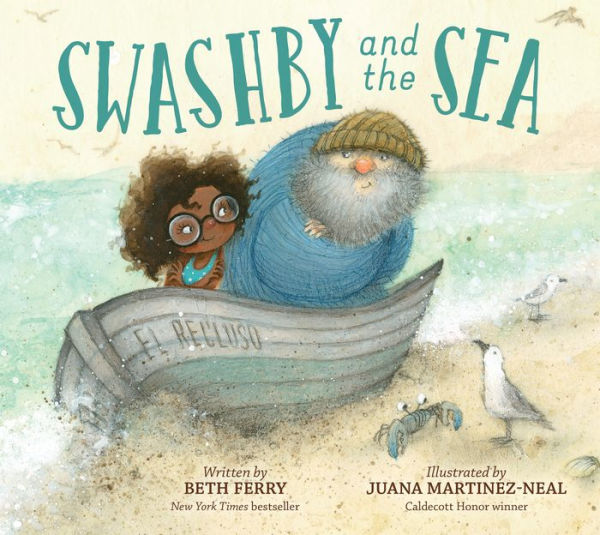 No-nonsense Captain Swashby has lived his life on the sea, by the sea, and with the sea—his oldest friend. He loves his quiet life just as it is: sandy and serene. When new neighbors settle in next door and disrupt his solitude, Captain Swashby leaves notes in the sand: “Please go away!” But the sea “fiddled, just a little” and changed the message to read, “PL—AY.” Could it be that the sea knows exactly what he needs?

Captain Swashby is reluctant to spend time with his neighbors, but the sea “decided to meddle more than just a little” and soon Captain Swashby discovers that “it was easy for Swashby to have tea with the girl and her granny—and ice cream, and lobster, and s’mores on the beach. It was easy for him to share his special sea glasses.”

Captain Swashby’s story is beautifully illustrated in sandy browns and ocean blues. Sometimes, Captain Swashby scowls and looks like a grump, but that doesn’t stop his new neighbor from asking him to play. The new neighbors—a girl and her grandmother—are African American and they both are adorably cute. The illustrations do an excellent job of conveying the characters’ wide range of emotions. As readers explore the illustrations, they may want to look for the seagulls that are scattered throughout the pages.

Even though Swashby and the Sea is a picture book, the story is intended to be read aloud to a child, rather than for the child to read it for the first time independently. Parents may need to explain some of the more difficult language, such as serene, civilized, and commandeered. Even though each page only has 1 to 4 sentences, the complex sentence structure may be difficult for young readers.

Swashby and the Sea is a sweet story that little readers will love. Anyone who has met someone that appears a little bit grumpy and unfriendly will relate to the story. In addition, Swashby and the Sea shows the importance of making new friends. Shawn Loves Sharks by Curtis Manley is another book that ocean-loving readers will enjoy and it also teaches an important lesson about friendship!