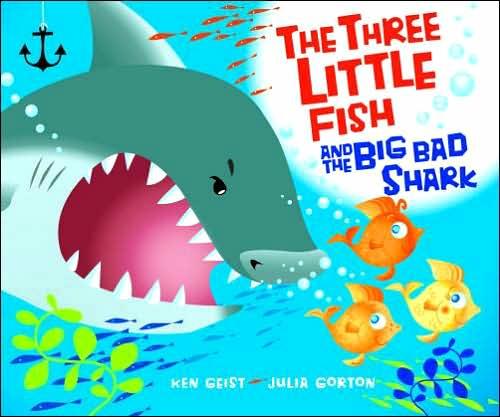 The Three Little Fish and the Big Bad Shark

“Little fish, little fish, let me come in.” “Not by the skin of my finny fin fin!” “Then I’ll munch, and I’ll crunch, and I’ll smash your house in!” Mama tells her three little fish that it’s time to make their own homes. Jim builds his house of seaweed, but the big bad shark munches it up. Tim builds his house of sand, but the shark crunches it up. It’s smart Kim who sets up house in an old sunken ship!

This reimagined version of the Three Little Pigs has no fear factor and is silly enough to entertain squirmy readers. Young readers will love watching the big bad shark break into the little fish’s house. But Jim, Tim, and Kim all know the importance of sticking together. In the end, “The big bad shark munched, and he crunched but he would not smash the house in and all his teeth fell out!” After losing all his teeth, the shark is seen eating a salad, and “the three little fish were safe at last.”

The Three Little Fish and the Big Bad Shark has plenty of visual appeal. The ocean world comes to life in bright colors. Jim, Tim, and Kim are orange fish that pop out of the blue ocean. Plus, readers will have fun finding the other ocean creatures, such as a crab and a turtle. The giant-sized shark shows all his sharp teeth as he narrowly misses chomping the fish.