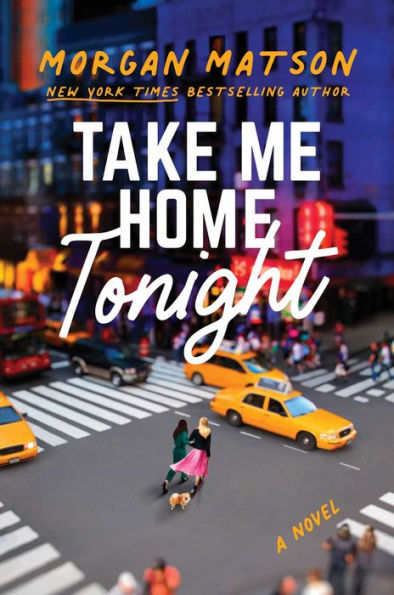 Other books by Morgan Matson

“We had shown up for each other. I knew we had a lot to catch up on and things we needed to say, but for the moment, that was enough. More than enough,” Stevie. –Take Me Home Tonight

Kat and Stevie have been best friends since they met in their high school’s theater department. Both are passionate about performing, and the two become as close as sisters (something that they love to hear). Kat hatches a plan to sneak out of their small town and go to New York. Kat plans to surprise Stevie by getting tickets for a play put on by her theatre teacher. As the two sneak into the city, they create a contingency plan; if they are separated they will meet at Grand Central Station at 11:11. But once they arrive in the city, things go horribly wrong.

Stevie runs into her stepsister, Mallory, who asks her to stop by her apartment and drop off a wallet. Once inside, Stevie and Kat meet Mallory’s Pomeranian and promptly get locked out of the apartment with no money and a dog in tow. Kat is content to roll with the punches, desperate to impress her teacher. Stevie, however, would rather just go home. The two fight and separate; Stevie goes to find Mallory’s spare keys while Kat goes to her teacher’s play. As Stevie embarks on a wild goose chase for Mallory’s keys, hitting various NYC landmarks along the way, Kat traverses the city with Cary, a boy she meets. She accompanies him through his various jobs, flirting and having fun. Kat then goes to see the play, which is astonishingly bad. Both friends are furious with each other, believing themselves to have been abandoned by the other. But Stevie and Kat still meet up at 11:11 and eventually recognize how much they need and rely on each other.

Take Me Home Tonight is a fast-paced, engaging novel that allows the reader to come along for a night-out-gone-horribly-astray. Told from both Stevie and Kat’s point of view, as well as another character called Teri, the reader is able to get to know these characters well. Although they have their flaws, both girls are generally likable and relatable to high school girls. Through their separation, Kat and Stevie learn that they will always find their way back to each other. “Not because we couldn’t be apart—the night we’d had proved that we could. But because we wanted to be together, which somehow made it that much better.”

The story contains a subplot surrounding Teri, one of Stevie and Kat’s friends who is kidnapped by a member of the Albanian mafia on the run with stolen goods. However, this subplot feels out of place in the novel, and—although resolved—feels rushed.

While at first glance, the story seems to be singularly focused on Stevie and Kat’s relationship, Take Me Home Tonight is a novel about relationships of all kinds—friendships, romantic relationships, parental relationships—and most importantly—your relationship with yourself. These elements form an entertaining story full of characters that seem familiar and real.

Through Stevie’s and Kat’s experiences, the story emphasizes the importance of understanding others, focusing less on yourself, and knowing that what is best for you may not be what is best for others. Although the plot can seem confusing or disconnected at times, Take Me Home Tonight is an intriguing novel with a multitude of complex, intertwining stories.

Other books by Morgan Matson

“We had shown up for each other. I knew we had a lot to catch up on and things we needed to say, but for the moment, that was enough. More than enough,” Stevie. –Take Me Home Tonight