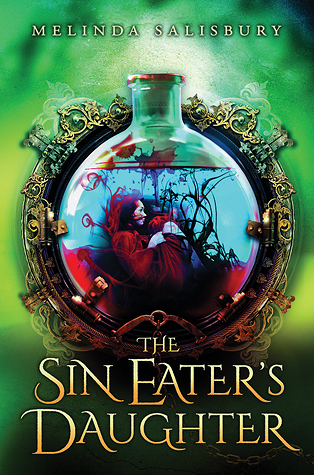 As a young girl, Twylla is brought to live in the castle because she is the Daunte Embodied, daughter of two gods. As Daunte Embodied, it is Twylla’s duty to bring justice to the kingdom. She is the executioner; anyone that she touches, dies.

Twylla thought life in the castle would be different. But the privileged life she leads is lonely and becomes more a prison than a home to her. The kingdom’s people fear her. The queen demands absolute obedience from her. And Merek, Twylla’s betrothed, confuses her.

Twylla believes her life is set in stone until she is appointed a new guard. This guard doesn’t fear her as so many others do. He sees past her role as Daunte Embodied, and sees her as a person. As they spend more time together, Twylla begins to wonder if there is a different path she could follow. But such a path would go against her loyalty to Merek and the kingdom.

Confused and lonely, Twylla soon learns that the queen has a deadly plan of her own—and Twylla is in the way of the queen getting her desire. Will Twylla be able to survive long enough to choose between two men—one who needs her, and one who claims to love her?

The Sin Eater’s Daughter takes the reader into an interesting world ruled by an evil queen. The queen is the strongest character in the book. She is willing to kill anyone, including her best friend who dared to become pregnant while the queen could not. The king, who appears infrequently, is seen as a kind, but powerless man. Merek, who does not agree with his mother’s cruel ways, seems desperate and unkind, which makes it difficult for the reader to feel sympathy for him. Even Twylla, who is the heroin, is difficult to relate to. Although her situation is difficult, she seems to be content to sit in her tower and feel sorry for herself.

Although the world created in The Sin Eater’s Daughter is interesting, it is often violent and disturbing. Death is seen often and is described in graphic detail. There are many adult topics that appear including the mention of incest, killing a child in the womb, and seduction.