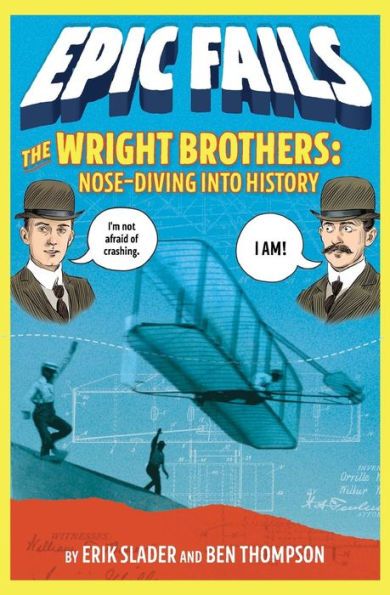 “Success is not measured by what a man accomplishes, but by the opposition he has encountered and the courage with which he has maintained the struggle against overwhelming odds,” Charles Lingdburg. –The Wright Brothers: Nose-Diving into History

The Wright Brothers: Nose-Diving into History

Today, Orville and Wilbur Wright are celebrated as heroes for their revolutionary contributions to science and engineering. They are acknowledged as the first men to successfully achieve powered, piloted flight. But their road to success was far from smooth. The Wright brothers encounter plenty of bumps, bruises, and mechanical failures along their way!

The Wright brothers were dedicated and they knew the importance of study and observation. In order to learn about flight, Wilbur reached out to the Smithsonian Institute and was given “any and all research available on aviation and human flight.” While the brothers studied and experimented, Wilbur and Orville also ran a successful business. The two brothers also had some epic failures, including injuries, embarrassments, and accidentally killing someone. Despite this, they persevered and never gave up on their dream. Their success was not based on luck. “It was hard work and common sense; they put their whole heart and soul and all their energy into an idea and they had the faith.”

The Wright Brothers: Nose-Diving into History teaches history in an engaging way. Both historical pictures and cartoonish, black and white illustrations appear on most pages. Many of the illustrations are comical, such as when the brothers were “greeted by swarming mosquitoes.” The short chapters, large text, and illustrations that appear on almost every page make the book accessible to readers. Some of the vocabulary is explained; however, readers may still struggle with the difficult vocabulary. The book ends with a timeline of important events in flight history.

The Wright Brothers: Nose-Diving into History uses a conversational tone that makes learning about history fun. The Wright brothers and other historical figures prove that failure is part of the process of achieving one’s dreams. Instead of looking at failure in a negative light, The Wright Brothers: Nose-Diving into History shows that every failure can be a learning experience. The book highlights the importance of perseverance, dedication, and education. The Wright brothers “never let their failures get the better of them, never let anyone tell them something couldn’t be done, and never gave up on their dreams.”

“Success is not measured by what a man accomplishes, but by the opposition he has encountered and the courage with which he has maintained the struggle against overwhelming odds,” Charles Lingdburg. –The Wright Brothers: Nose-Diving into History