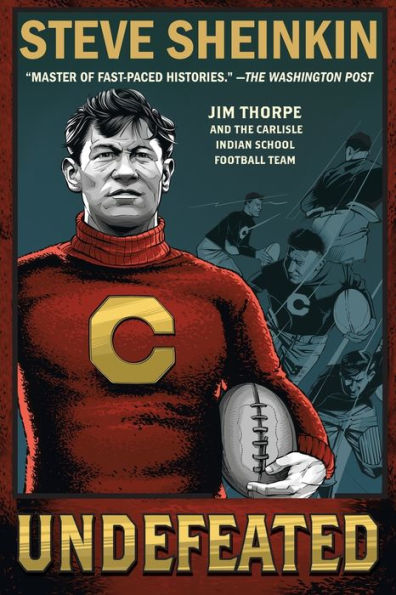 "Our greatest glory consists not in never failing, but in rising every time we fall,” Frank Cayou. –Undefeated

In 1907, the Carlisle Indian School in Pennsylvania became one of the most innovative football teams in the United States. Lead by Ivy League graduate Pop Warner and star player Jim Thorpe, this team would go on to challenge the most prominent football teams of the day, including Harvard, the University of Pennsylvania, and Yale.

This narrative nonfiction story highlights the history of football and of the United States’ direct involvement in the mistreatment of Native Americans. The Carlisle Indian Industrial School was the first government-run boarding school meant to assimilate Native Americans into white society. The school opened after the Black Hills war and centuries of violent conflict. Native American children were taken from their homes to live in military-style schools, where they were not allowed to dress in traditional Native American clothing nor speak their native languages. This practice became standard in the U.S., effectively cutting children off from their parents and their cultures. This is the context that surrounded Jim Thorpe and the Carlisle Indian School football team. It is a history unknown by most and not widely discussed.

Undefeated weaves the history of football and the Carlisle Indian School Football Team into the United States’ treatment of indigenous people. Sheinkin masterfully presents history without holding back on the grim reality of boarding schools or the overwhelming obstacles Native American students faced both on and off the football field. Sheinkin effectively balances a creative narrative nonfiction style with more strait-laced historical aspects. These two facets create an engaging view of a lesser-known aspect of one of the United States’ favorite sports without sacrificing accuracy or becoming boring.

The football-heavy parts of this story delve into the danger the players faced before football was modernized. Sheinkin makes the game descriptions digestible even to those who don’t know football or the sport’s history well. Undefeated takes readers through the highs and lows of practices and games, giving readers the feeling of being there in real-time. Ultimately, Undefeated shows a love for football that is untarnished by time.

Undefeated is not a typical football story about the underdog team fighting for first place. The story is far more complicated and interesting, and it breathes life into its historical cast of characters. History rarely comes with clean-cut lessons, but Undefeated presents the need for perseverance when the going gets tough. The world that Jim Thorpe and his classmates from the Carlisle Indian School lived in was unfair to them, and their stories deserve recognition in American history. Their legacy lives on in one of America’s favorite pastimes and their influence upon football will carry forward for generations to come.

"Our greatest glory consists not in never failing, but in rising every time we fall,” Frank Cayou. –Undefeated