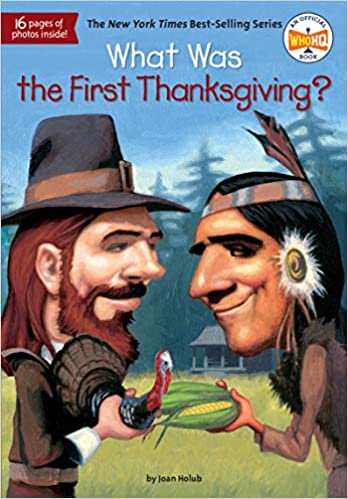 After their first harvest in 1621, the Pilgrims at Plymouth shared a three-day feast with their Native American neighbors. Of course, the Pilgrims and the Wampanoag didn’t know it at the time, but they were making history. However, before that first Thanksgiving, the Pilgrims first had to travel to the New World and set up their colony.

What Was the First Thanksgiving? will pull readers in with its fun format which has large, black and white illustrations on every page. The book uses large font, short chapters, and easy vocabulary that makes the book easy to read. Plus, each event is explained fully and broken into smaller sections, so readers will not get confused.

To give readers a better understanding of the time period, the book includes sections with additional information about the people and the times. Plus, there are 16 pages of historical artwork depicting the Wampanoags, the Pilgrims, the Mayflower, and more. Topics cover everything from the Wampanoag, Squanto, and other historical people. The end of the book also includes a timeline.

Even though the book focuses on the Pilgrims, it doesn’t portray them as if they were perfect people. Instead, the book explores how the Pilgrims took advantage of the Wampanoag people. For example, when they first arrived in Massachusetts, the Pilgrims “stole some corn. This meant that the Native Americans who’d harvested it would not have the corn for themselves. They might go hungry.” Despite this, for a brief time the Pilgrims and the Wampanoag people came together to “rejoice together after we had gathered the fruits of our labors.”

Anyone interested in the Pilgrims should read What Was the First Thanksgiving? because it gives insight into the difficulties that the Pilgrims faced. Plus, it explains how Thanksgiving became a national holiday. Most people probably do not realize that without Sarah Hale, an author and editor for a magazine, Thanksgiving would never have become an important American tradition.

What Was the First Thanksgiving? educates readers through interesting facts that are presented in an appealing format. The book is perfect for readers who need to research Thanksgiving and the Pilgrims. The back of the book also includes a bibliography with additional resources for readers who want to learn even more. Readers eager to read more about the Pilgrims should add The Mayflower by Kate Messner and A Journey to the New World: The Diary of Remember Patience Whipple by Kathryn Lasky to their must-read list. 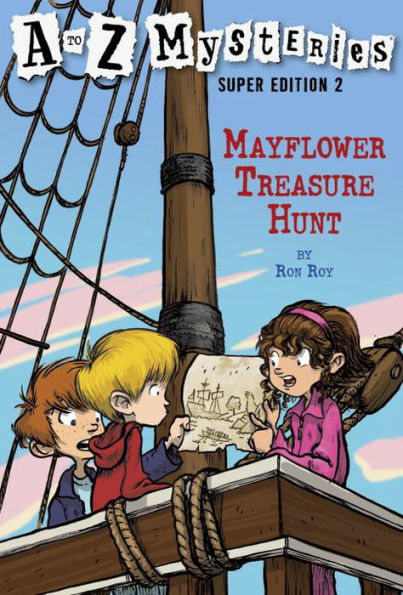 The Hunt is on! Dink, Josh, and Ruth Rose are spending Thanksgiving in Plymouth, Massachusetts. They can’t wait to see the sights and have a Thanksgiving dinner just like the Pilgrims would have eaten. Then the kids learn about a sapphire necklace that went missing on the real Mayflower. Could the 400-year-old treasure be hidden somewhere nearby? And will someone else find it before they do?

Mystery lovers will learn history as they follow Dink, Josh, and Ruth Rose through the streets of Massachusetts. The three kids’ journey focuses on historical places connected to the Mayflower. The simple plot is fast-paced and contains enough suspense and mystery to keep readers interested. While the three friends do not follow a trail of clues, they use historical information to help solve the case. In addition, when the kids find the necklace, they never consider keeping it for themselves. Instead, they donate the necklace to the local museum.

Mayflower Treasure Hunt’s short chapters and black and white illustrations make the story accessible to readers. Large illustrations appear every 2 to 4 pages. Many of the illustrations are one page and help readers understand the plot. Plus, readers can hunt through the pictures to find a hidden message.

One negative aspect of the story, is that when Dirk believes someone is following him and his friends, they do not seek out adult help. Instead, they try to hide from the person and end up in a situation that could have been dangerous. Parents may want to discuss the importance of seeking an adult if they feel they are in danger.

Mayflower Treasure Hunt will get a peek into the Pilgrims’ world. For instance, readers will be surprised to learn that the Pilgrims had a village jail. “Being lazy, not sharing, not attending church” were all crimes. Stealing a pig or a hen were also jail-worthy crimes. Mystery-loving readers will enjoy the adventurous story. The A to Z Mysteries Series will hook chapter book readers. Plus, the series has over 26 books to keep readers entertained. 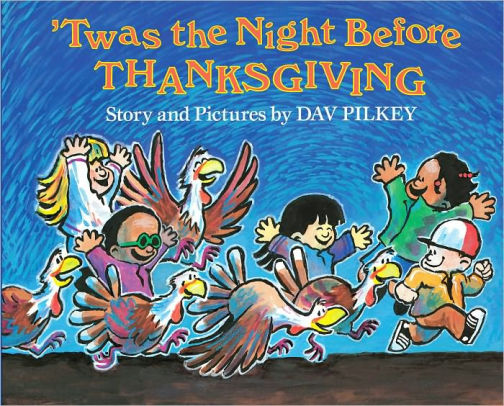 The day before Thanksgiving, students go on a field trip to a “miniature farm.” Farmer Mac Nuggett shows the kids his “eight tiny turkeys.” The kids play and hug the turkeys “and they gobbled and giggled / As friends sometimes do.” One of the children finds an ax, and Farmer Nuggett explains that the turkeys will be “chopped up and roasted / For Thanksgiving feast.” When the children hear this, they begin to cry. When the teacher and Farmer Nuggett go to fetch some water, the kids hide the turkeys under their shirts. When the kids and the turkeys are safely home, “They feasted on veggies / with jelly and toast, / And everyone was thankful / (The turkeys were most!).

Using a similar format as ‘Twas the Night Before Christmas, Pilkey tells an odd tale about the day before Thanksgiving. While the full page illustrations use cartoonish illustrations, the end of the poem takes on a grim tone. When Farmer Nuggett shows the kids his ax, he has a creepy smile on his face. Both the kids and the turkeys are clearly distressed by the thought of the turkeys becoming Thanksgiving dinner. Instead of being humorous, younger readers may find the story distressing.

Unfortunately, ‘Twas the Night Before Thanksgiving does not have any of the charm as ‘Twas the Night Before Christmas. The author also adds in bits of other fairytales, which breaks up the story’s flow. Each page has 2-8 short lines; however, the rhyming is inconsistent. Even though the story has a happy ending, it doesn’t focus on being thankful for all the good in life.

The picture book is intended to be read aloud to a child, rather than for a child to read it for the first time independently. Readers who are looking for a good holiday story should skip ‘Twas the Night Before Thanksgiving. 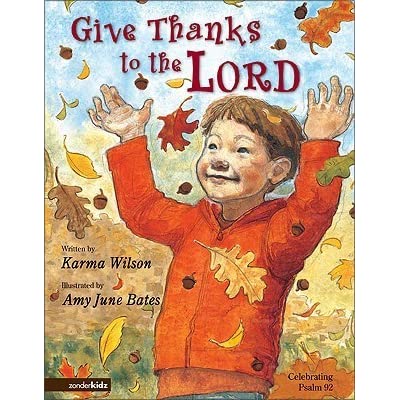 This joyous celebration of Thanksgiving references Psalm 92. Told from the point of view of one young member of an extended family, Give Thanks to the Lord celebrates joy of all kind – from the arrival of distant relatives to a cozy house already filled with merriment, to apple cider and the delicious smells of roasting turkey and baking pies. And just when your mouth is watering, sit down and join a thankful child in prayer, praising God for, “Food and fun and family, all the wonderful things I see.”

Fall comes alive in the full-page illustrations that use fall colors. Each picture focuses on a little boy who is surrounded by a large family. Most pictures also include the boy’s dog, who is also enjoying Thanksgiving day. Give Thanks to the Lord shows the joys of simple things—a cup of hot chocolate, playing in the fallen leaves, and having enough olives for each one of your fingers.