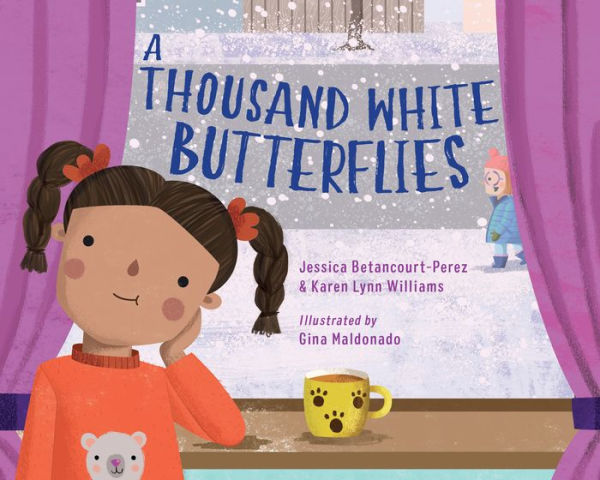 As if being new to the United States wasn’t hard enough, Isabella’s first day of school is canceled due to snow!

Isabella has recently arrived from Colombia with her mother and Abuela. She misses Papa, who is still in South America. It’s her first day of school, her “make-new-friends” day, but when classes are canceled because of too much snow, Isabella misses her warm, green, Colombia more than ever. Then Isabella meets Katie and finds out that making friends in the cold is easier than she thought!

A Thousand White Butterflies is a beautiful story that shows that friendship can flourish despite differences. Like many children who have immigrated to America, Isabella misses her home and her father and she worries about making friends. Readers will enjoy seeing Isabella making a new friend and show her friend part of her culture. When the two girls build a snowman, “Katie helps me put Papa’s ruana on the snowman. We add a sombrero vueltiao.” While the story starts with Isabella being upset about moving to America, it ends on a high note with Isabella looking forward to going to school with Katie.

The large cartoon-like illustrations show the magic of snow and friendship. Each illustration shows Isabella’s emotions including frowning, crying, and smiling. Readers will enjoy finding a cat that appears in almost every picture. Each page has 2 to 4 simple sentences and many of the sentences include Spanish. Even though A Thousand White Butterflies is a picture book it is intended to be read aloud to a child, rather than for the child to read it for the first time independently. The end of the book includes the author’s notes on how the immigrant story pertains to their lives as well as a glossary of Spanish words.

Isabella’s story will help readers become more compassionate as they learn about immigration. A Thousand White Butterflies would make an excellent book for parents to read with their children. Parents could use the story as a conversation starter about moving, making new friends, or being kind to others. While the story introduces the idea of immigration, it stays away from the political debate and shows how one specific child has been impacted by immigrating to America. Readers who would like to explore how immigration affects families should also read Mango Moon by Diane De Anda & Sue Cornelison.