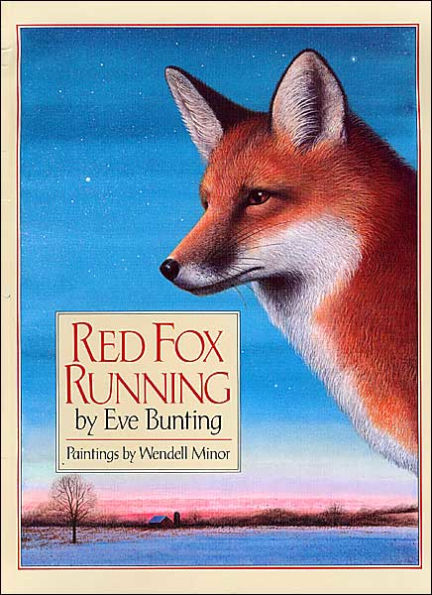 Other books by Eve Bunting

Red Fox runs on and on through the snow in search of food for his family. Then, he makes the long trek back to his den where his mate and cubs are waiting. The lyrical poem focuses on a winter day and on Red Fox’s search for food. As he searches, he notices many different animals. Unlike many children’s books, Red Fox Running doesn’t shy away from the hunger that animals face in the winter. Red Fox is described as starving and desperate to find food.

The beautiful poem is accompanied by large, full-color illustrations. Although many of the illustrations show Red Fox in a winter landscape, there are other wildlife shown such as duck, geese, and a rabbit. The ending of the story shows Red Fox carrying a dead animal in his mouth. Even though Red Fox’s dinner is not recognizable, the illustration might upset some children.

Even though Red Fox Running is a picture book, the story is intended to be read aloud to a child rather than for a child to read it for the first time independently. Each page of the poem has 8-9 short lines. Many of the pages have no words, but they use the illustrations to bring the winter landscape and the forest animals to life instead. Even though the illustrations are stunning and the poem uses a concerned tone, younger readers who are not ready to be introduced to animals hunting for pray will want to leave Red Fox Running on the shelf.

Other books by Eve Bunting