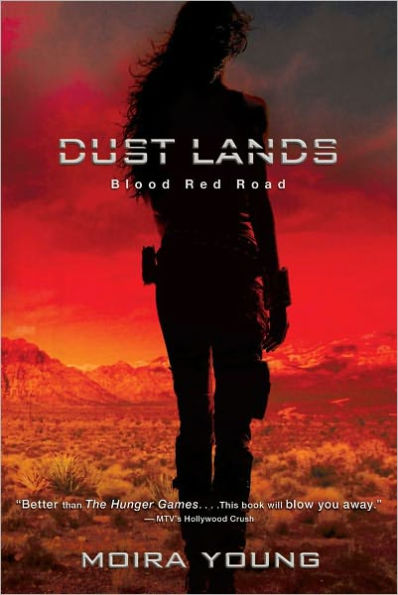 The Dust Lands are a post-apocalyptic world where written language has been forgotten, civilization has collapsed, and the strong rule through fear. Saba has grown up in a shack in the middle of nowhere with her twin brother, her sister, and her father. She rarely sees other people and has never been to a town.

Then Tonton soldiers come. They kill her father and kidnap her brother. For the first time in her life, Saba can’t follow her brother’s lead. Now she must be the leader because her brother’s life depends on it. Saba leaves the only home she has ever known and sets off in search of her twin.

Adventure after adventure follows. Saba’s path is not a straight one, but she never gives up hope. She knows what she wants and will do anything to get it. Written in a regional dialect, this first-person narration shows Saba’s strong will and determination. Even when sold into slavery, Saba is never the victim. She is never weak and her spirit is never broken.

Blood Red Road is fast-paced and exciting. A large cast of characters adds to this richly developed world of droughts and ruin. What sets this novel apart is that Young effortlessly turns the traditional damsel-rescuer model on its head. Saba is a wonderful role model for teenage girls that proves girls can be strong heroes too. Because of the sexual content and the violence, Blood Red Road is best suited for high school readers.