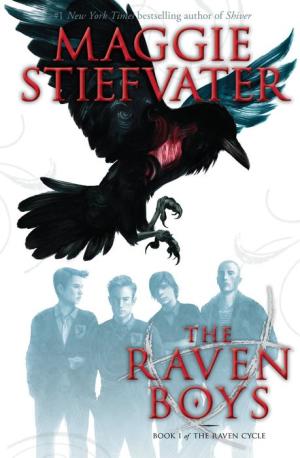 “[Gansey’s] bald expression held something new: not the raw delight of finding the ley line or the sly pleasure of teasing Blue. [Blue] recognized the strange happiness that came from loving something without knowing why you did, that strange happiness that was sometimes so big that it felt like sadness. It was the way she felt when she looked at the stars.” –The Raven Boys

The predictions from Blue Sargent’s house on 300 Fox Way never seem out of the ordinary for her. Blue’s mother Maura Sargent and the other women living in 300 Fox Way—Persephone, Calla, and Orla—are all psychics who weave their predictions throughout the town of Henrietta, Virginia so regularly that for Blue it seems like second-nature. Unlike the rest of her family, however, Blue can only amplify the psychics’ powers, without seeing any of that power herself. Other truths— such as the identity of Blue’s father, or the reason why her aunt Neeve comes to town after success as a TV psychic— also remain hidden from Blue.

Despite this, there is one conclusion clearly given to Blue, over and over throughout her life, in runes, in palm readings, decks of tarot and tea leaves: the prediction that if Blue were to kiss her true love, he would die.

Blue decides to never fall in love, casting this prediction aside like a fantasy. But when she arrives, Neeve tells Blue this is the year Blue will fall in love. And on St. Mark’s Eve, the day when Maura and Blue record the names of the spirits set to die in twelve months, Blue sees a boy from the Aglionby Acadamy. A boy named Gansey.

Blue usually avoids the boys at the wealthy Aglionby Academy. Rich boys, she says, “think they’re better than us.” However, after St. Mark’s Day, an encounter with the living Gansey and his friends—Ronan, Adam, and Noah— at the diner where she works draws Blue towards this group of boys as they sweep her into their continuous search for a sleeping Welsh king among the ley lines of Henrietta. As the ley lines form a pattern between significant supernatural quirks and historical signifiers, they also begin to show Blue and the Raven Boys an uncanny world hidden deep below this Virginian town’s mundane surface.

The story moves between the perspectives of Blue, Gansey, Adam, and an Aglionby Latin teacher known as Barrington Whelk. The Raven Boys grounds legends of the Welsh King Glendower and whimsical, otherworldly fantasy within a small town sheerly divided by class. Settings that branch everywhere from a room full of mirrored worlds, the well-worn upholstery of a bright orange Camaro, and the Latin whispers of a forest called Cabeswater will transfix readers as they plunge into a narrative rich with intricately detailed plot twists.

However, the real magic in Stiefvater’s writing lies in her ability to present each character in The Raven Boys as realistic characters with their own, individual sense of what’s right and what’s necessary in the challenges they face. Each character holds their own trajectories: Blue struggles to reconcile how to define her own unique power and with the idea, she might someday kill Gansey. Gansey holds a desperate need to define himself beyond his family’s wealth through his hunt for Glendower. Ronan fiercely battles with his brother’s supervision following the death of their father. Adam strives to be self-sufficient with a free will that stands apart from his abusive father and Gansey’s money. Noah is cold because, as he says, “I’ve been dead for seven years.” All characters hold their own journey throughout the narrative, which influences the way they interact with each other in compelling ways. Readers will truly fall in love with The Raven Boys characters as they each find the balance between self-reliance and trust in others, the power in realizing self-worth, the beauty of remembering things often overlooked, and the peace of understanding that things aren’t always what they may seem. In evoking the magic of Henrietta, Virginia, Stiefvater shows every reader the complicated path towards finding the place you truly feel like you belong.

“[Gansey’s] bald expression held something new: not the raw delight of finding the ley line or the sly pleasure of teasing Blue. [Blue] recognized the strange happiness that came from loving something without knowing why you did, that strange happiness that was sometimes so big that it felt like sadness. It was the way she felt when she looked at the stars.” –The Raven Boys