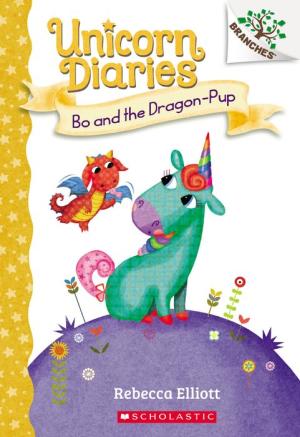 Other books by Rebecca Elliott

“I’m very proud of you. You were all great detectives this week. And you were great friends to a dragon-pup,” Mr. Rumptwinkle –Bo and the Dragon-Pup

Bo Tinseltail lives in Sparklegrove Forest, where lots of other magical creatures live. Bo and the other unicorns learn about dragons at school, but they have never seen them before. That is, until now! A blanket and a pair of glasses go missing from school, and the clues lead to the dragon caves! Will Bo and the other unicorns meet a scary creature there? Or will they make a brand-new friend?

The Unicorn Diaries Series is part of the early chapter book line Branches, which is aimed at newly independent readers. Bo and the Dragon-Pup is told in a blend of diary entries, speech bubbles, lists, and diagrams. The blended text makes the story choppy, but it also makes each page’s text manageable for young readers. Plus, some of the story’s unique, fun words, such as “glitterrific,” appear in large green font. While most of the vocabulary is easy to read, readers may need help with some words such as thingamabob, Mr. Rumtwinkle, and magnifying.

Readers will be attracted to Bo and the Dragon-Pup because of the rainbow of colors used on each page’s illustrations. However, they will keep reading because of the fun format and interesting characters, such as mermaids, talking animals, and a blue ogre. Chapter one introduces the main characters, Sparklegrove forest, and also gives interesting facts about dragons and unicorns.

Bo and the Dragon-Pup is a magical book that revolves around a fast-paced mystery. As the unicorns try to solve the mystery, they follow clues and work together. Readers will fall in love with the mischievous dragon and the helpful unicorns. If you’re looking for a glitterific book that makes reading fun, Bo and the Dragon-Pup is the book for you. Mystery-loving readers should also add Wallace and Grace and the Lost Puppy by Heather Alexander to their reading list.

Other books by Rebecca Elliott

“I’m very proud of you. You were all great detectives this week. And you were great friends to a dragon-pup,” Mr. Rumptwinkle –Bo and the Dragon-Pup