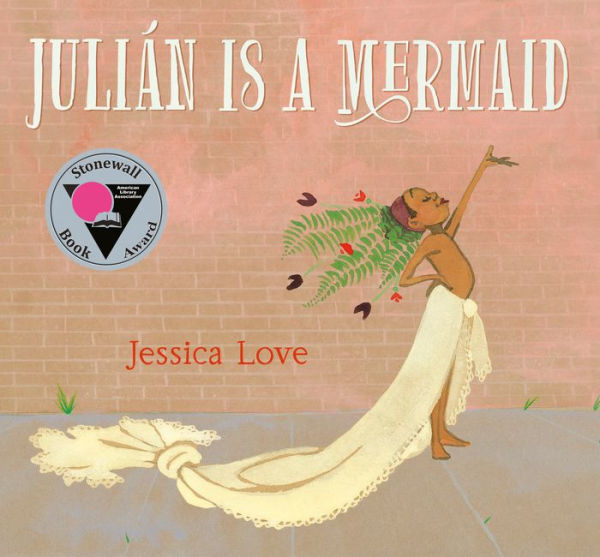 Julián is a Mermaid

Every Saturday morning, Julián and his abuela go swimming. But the day Julián spies three women on the subway, everything changes. He is entranced by their beautiful hair, their swishy, shimmering mermaid gowns, and their total confidence. Each woman has a different body type, and each woman is uniquely beautiful. When Julián sees the women, his imagination dives into the ocean where he is free to be a mermaid surrounded by colorful sea creatures. In his imagination, Julián’s hair grows long and he glides around the sea with a beautiful pink tail.

When Julián goes back to his abuela’s house, all he can think of is becoming a mermaid himself. Using a vase of flowers, a tube of lipstick, and his abuela’s curtains, Julián dresses as a mermaid. When Julián’s abuela sees him, she scowls and then leaves the room. Julián worries he will be scolded, which is conveyed through his facial expressions. When Julián’s abuela returns, she gives him a beaded necklace and takes him to the beach where he joins a parade of people dressed as mermaids and other sea creatures.

Any child who has played dress-up will relate to Julián, whose definition of beauty comes from those around him. Jessica Love’s illustrations use soft browns and greens with a pop of color. Both Julián’s real world and imaginary world are portrayed with beauty. Jessica Love often allows the pictures to speak for themselves. Because many of the pages do not have words, readers will be able to imagine themselves in the story and let their imaginations roam.

Like many children, Julián is afraid of his abuela’s reaction. However, his abuela surprises him by not only adding to his mermaid costume, but also taking him to see others who are brave enough to parade around the beach in their own costumes. The vivid costumes include sea green mermaids, large colorful fish, as well as other sea creatures. The magic of Julián’s story is its ability to show readers the importance of accepting yourself and allowing your imagination to take you to unexpected places. In the end, it will remind parents of the importance of encouraging their children to express themselves, instead of scolding them for dressing outside of society’s norms. Like Julián, we should all believe that all it takes to be a mermaid is a little imagination and a beautiful tail.