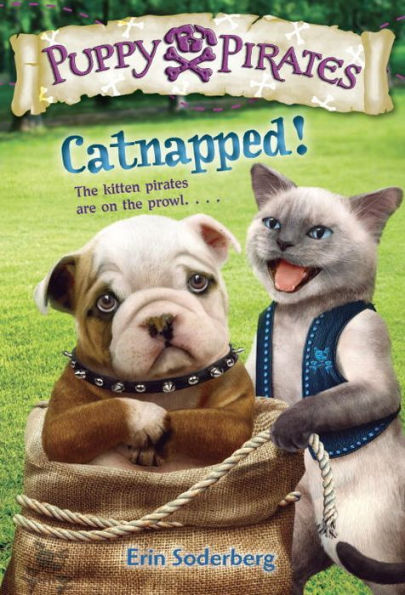 “There’s nothing scarier than swimming. Except cats. . . and chickens. . . and bilge rats. . . and Steak-Eye . . . and grass that touches my belly. . . and those little snails that sometimes get stuck to the side of our ship. . . d” Spike. –Catnapped!

Fighting like cats and dogs? Exactly! The puppy pirates played a prank on the kitten pirates and meow! the kittens sure are mad. After an ambush, the kittens capture some of the Salty Bone’s crew. The puppies are able to find their way out of lockup, but how will they escape the ship? Can the pups escape the kittens’ claws? It’s dogs versus cats, and may the best pirates win.

Catnapped shows that even the bravest pirates sometimes feel fear. For instance, Wally is terrified of the water. Despite his fear, Wally jumps to the rescue when his friends need him. While escaping the kittens’ pirate ship, someone drops an oar which floats away. Wally swims in the ocean so he can retrieve the boat’s oar. Without Wally’s bravery, the puppy pirates would have been stranded in the middle of the ocean.

Even though the puppies’ pranks are humorous, the story shows how one prank can cause a host of problems. When Wally and the others finally break free, some of the puppies want to seek revenge. Old Salt gives wise advice, “Consider your next steps carefully, Captain. I just mean, maybe it’s best to end this here. Don’t go looking for more trouble.”

Each book in the Puppy Pirates Series focuses on the same characters while still adding plenty of unexpected action to the story. The black and white illustrations are adorably cute and will also help readers understand the story’s plot. With short chapters, large text, and illustrations every 1 to 5 pages, Catnapped is the perfect book for readers ready for chapter books.

Catnapped takes the feud between cats and dogs and creates an entertaining story that pirate-loving readers will enjoy. Young landlubbers will be eager to find out how the pirate puppies escape the kittens’ claws. With 7+ books in the series, the Puppy Pirates Series has plenty of adventure to entertain readers.

“There’s nothing scarier than swimming. Except cats. . . and chickens. . . and bilge rats. . . and Steak-Eye . . . and grass that touches my belly. . . and those little snails that sometimes get stuck to the side of our ship. . . d” Spike. –Catnapped!