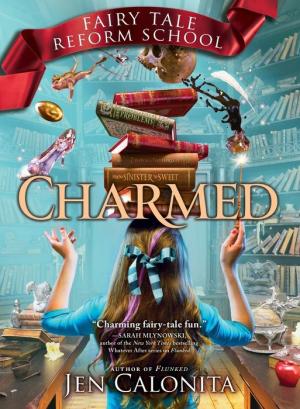 “I look at the group before me. A pirate, an ogre, a witch, a fairy, a royal, and me. These aren’t good odds, but maybe Father and Maxine are right: together, we can do anything,” said Gillian Cobbler. –Charmed

The second book in the Fairy Tale Reform School Series revisits Gilly Cobbler and her friends following their triumph against the evil queen Harlow. Now that Gilly has been named a hero by all of Enchantasia, she experiences the praise she has never received before. Plus, her father’s glass slipper making business is booming and everything seems to be going her way.

Just as all is going well, the evil fairy Alva strikes again, breaking Harlow out of the Fairy Tale Reform School (FTRS) and leaving behind a manifesto that leads many reformed students back to villainy. Gilly decides to defend her status as a hero, taking Alva down all alone. Gilly sets off to uncover the identity of a mole at the school who is helping with Alva’s takeover. As Gilly will discover, the path to victory is more complicated than she believes. The lines between good and evil are blurred, and Gilly might just lose herself in the process without the help of her friends.

Charmed engages readers and explores what it means to be a hero. Gilly thinks she can handle Alva on her own, so she abandons the friends who helped her last time. Plus, she becomes overly confident due to the praise she is given. Eventually, Gilly comes to realize that she needs humility and the help of those who truly know and care about her. As her father says, “Sometimes being a hero means being brave. Other times it means knowing when you need help.”

In addition to working with friends, Gilly has to become more open-minded. She must confront her own prejudices about people like the Royal Ladies in Waiting. While she perceives them as evil and silly, she quickly learns that people are not so simple. Gilly must also confront her own behavior. While she sees herself as a hero, she is also capable of doing bad things. She says, “I’m still a little bit bad, a lot good, and a whole lot of other things too. Just as it should be.”
In Charmed the “villains” are given second chances. Even Gilly is misguided at times, and she must learn how to face her own misgivings and the guilt that accompanies them. Charmed allows readers to dive deeper into the overarching theme of recognizing that people are not rigidly good or bad; they are capable of both. Calonita continues to establish the message that people can change. Readers will appreciate how Gilly stumbles but is able to pick herself back up. Gilly learns and grows which leaves readers curious as to what will come next. While the ending is entirely satisfying in itself, the book ends with an open-ended letter from Gilly’s friend, Jax. The letter introduces the conflict for the third book in the series, Tricked, without compromising the characters’ victory.

Gilly leads readers through the story with help from the occasional “Happily Ever After Scroll,” a sort of daily newspaper that provides context for events throughout the story as well as introduces characters. The scrolls allow readers who have not read the first book in the series to easily follow the plot of this installment. Readers who enjoyed the film series Descendents will also enjoy taking a journey into the lives of the students at Fairy Tale Reform School. The high stakes and magical showdowns are captivating from the first page and readers will also be excited to see familiar faces from classic fairy tales.

“I look at the group before me. A pirate, an ogre, a witch, a fairy, a royal, and me. These aren’t good odds, but maybe Father and Maxine are right: together, we can do anything,” said Gillian Cobbler. –Charmed