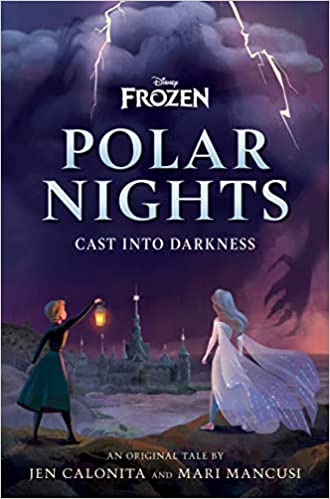 The elder troll dropped his gaze from the heavens and turned back to the two queens, his rocky face solemn as the grave. ‘If you fail to set things right, day will forever be cast into night.’” —Disney Frozen Polar Nights

Two months after the events of Frozen 2, the Arendelle sisters are still adjusting to their new roles. Elsa rules over the Enchanted Forest but admits, “even now that I’ve taken my place among the spirits, magic isn’t always easy.”  Meanwhile, Anna is newly engaged and new queen of Arendelle. While in the midst of planning for the annual Polar Night’s Festival, Anna takes a break to visit her sister alongside Kristoff, Olaf, and Sven. Around a campfire, Kristoff recalls the legend of a different pair of royal sisters, how one drowned the other in a jealous rage. The murdered sister arose as a zombified creature—a draugr—a “‘soulless monster ready to seek revenge against those who did it wrong.’”

After Kristoff finishes the story, a mysterious storm blows in, and when he and Anna return to Arendelle the next day, something is amiss. Storms keep coming, the sky grows darker and darker, and everyone seems to be losing their memories. It seems the draugr from the story is real and after them. Anna and Elsa must embark on a quest to figure out how to stop the creature before it’s too late.

Disney Frozen Polar Nights is told from the alternating third-person perspectives of Elsa (written by Mancusi) and Anna (written by Calonita). The two authors seamlessly blend the chapters and the story flows well. The reader gets a glimpse into the thoughts and feelings of both sisters and is able to have a better understanding of their relationship with each other as a result. Through the characters’ actions, the franchise’s theme of sisterhood and the importance of family are brightly showcased.

Anna, Elsa, and the other characters stay true to how they were portrayed in the films. The bond between the sisters is well illustrated, and their dynamic is charming, with Anna being more impulsive and Elsa being more grounded. Because of their differences, they balance each other out and bring out the best in each other. Anna’s romance with Kristoff is also very sweet, and it’s charming to watch them interact because they show how much they care about each other.

The plot revolves around Anna and Elsa figuring out the truth of what happened between the sisters from Kristoff’s story. It is a bit predictable that the circumstances around the death of the younger sister differ dramatically from the story that spread, and that this misinformation is the primary cause of the spiritual unrest. However, the journey is still enjoyable and is certain to captivate the target demographic.

Fans of Frozen will be swept up in this story that so vividly captures the Frozen world and characters. Disney Frozen Polar Night is a dramatic tale, but characters like Olaf provide some humor along the way to balance things out. The spooky story contains some imagery and tense moments that might be scary for certain readers. However, readers who appreciate monsters and mystery will enjoy the familiar characters and simple plot. Readers who are looking for kid-friendly ghost stories should add The Trail of the Ghost Bunny by Linda Joy Singleton to their reading list. Readers who love fairytale-inspired stories can jump into other fairytales by reading the Whatever After Series by Sarah Mlynowski.

The elder troll dropped his gaze from the heavens and turned back to the two queens, his rocky face solemn as the grave. ‘If you fail to set things right, day will forever be cast into night.’” —Disney Frozen Polar Nights