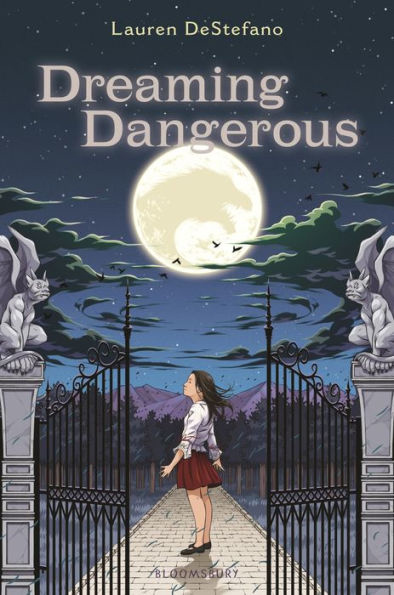 “Why cry about something when you could fix it?” Plum —Dreaming Dangerous

Brassmere Academy is the only home Plum has ever known. Hidden deep in the woods, Brassmere is home to orphans who have extraordinary abilities. Each night when Plum lays down to sleep, she travels into dream worlds, where her best friends Vien, Gwendle, and Artem meet her. While dreaming, the friends go on exciting journeys and fight dangerous monsters.

During a dream, Artem tells Plum, “They’re coming for us. One by one, until they find the one they need.” When she wakes up, Artem is missing. No one knows where Artem has gone. Plum is convinced that the adults at the school cannot be trusted.

Plum, Vien, and Gwendle search for their friend. As they find clues in both the dreaming and waking worlds, they uncover many secrets. Plum has always considered the director, Dr. Abarrane, a trusted adult, but now she wonders what dark secrets he keeps. Brassmere has always kept the children safe from the outside world, but is the real danger inside Brassmere’s walls? Will Plum and her friends be the next to disappear?

Told from Plum’s point of view, Dreaming Dangerous quickly jumps into the mystery of Brassmere Academy. Right from the start, the reader understands the strong bonds of friendship between the four friends. The friends travel into the dream world, where they encounter imaginative worlds full of monsters. Plum spends an equal amount of time in the real world and the dream world, which adds drama but also may cause some confusion.

Dreaming Dangerous is a compelling story that has the perfect amount of suspense and scare factor for younger readers. Readers will be drawn into the story because of the interesting dream world, the children’s abilities, and the mystery surrounding Brassmere Academy. The ending of the story shows the violent death of Plum’s mother and the evil nature of Dr. Abarrane. However, the death is not described in gory detail. The only negative aspect of the story is the abrupt, confusing conclusion that leaves many questions unanswered.

Many readers will be drawn to Dreaming Dangerous because of the well-develop characters, monsters, and mystery. The fantasy story is at times creepy and frightening. For readers who like Gothic-style mysteries, Dreaming Dangerous is an easy-to-read, fast-paced story that will entertain until the very end.

“Why cry about something when you could fix it?” Plum —Dreaming Dangerous