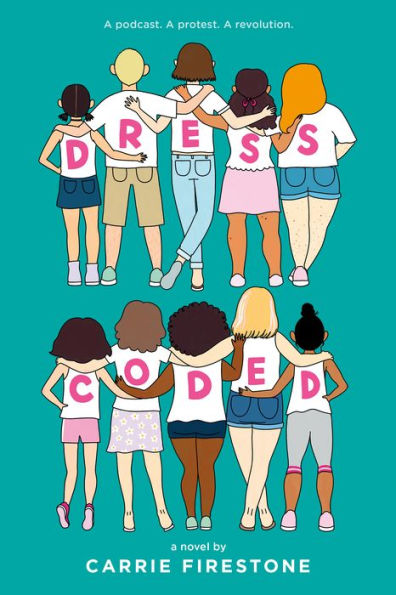 “Sometimes eating cookies with a best friend in the middle of the night is better than talking,” Molly –Dress Coded

Molly wasn’t planning on starting a rebellion. But when she sees a teacher yelling at Olivia for wearing a tank top, Molly takes action. She wants others to know that the middle school dress code unfairly targets girls who have mature bodies. In order to tell their stories, Molly starts a podcast.

The podcast explains how Liza got dress coded and Molly didn’t, even though they were wearing the exact same outfit. Other girls were dress coded because their shorts were too short, their shirts showed a sliver of their stomach or their clothing didn’t cover their shoulders. It isn’t fair.

Middle school is hard enough without having teachers trolling the halls looking for dress code violations. Soon, Molly’s podcast creates a small rebellion that swells into a revolution. The girls are standing up for what is right, but will teachers and parents listen?

Dress Coded’s topic and teen-friendly format will appeal to a wide audience. The short chapters are broken into letters, lists, Molly’s dress code podcast, and definitions. The story doesn’t shy away from the humiliation and bullying that can happen because of a dress code. Molly tackles the dress code by going through the proper steps: getting students to sign a petition, sending the petition to the superintendent, and trying to get the petition placed put on the school board’s agenda. It is only after all of these attempts fail that Molly pleads for other students to camp outside of the school in protest.

While Molly is fighting to change the dress code, she is also dealing with a family in crisis. Her brother is addicted to vaping, which has her parents concerned. Although the story describes some of the harmful effects of vaping, too much emphasis is put on how many teens vape and where they get the vaping pods. Instead of feeling like a natural part of the story, the descriptions of vaping middle schoolers become tiresome.

Dress Coded does an excellent job of explaining the harmful effects of vaping. However, the story doesn’t address the topic of bullying, even though one of the recurring characters has a mean name for everyone. The story also throws in a trans student getting into trouble for wearing lipstick, a short conversation about the possibility of Molly being bisexual, and a girl who is crushing on another girl. These scenes do nothing to advance the plot and were not used as a teaching moment for respecting others.

While Dresses Coded isn’t amazing literature, the story has a high-interest topic and a story that middle school readers will enjoy. Molly is a likable character who shows the importance of perseverance. The story’s message is clear: girls’ bodies are not something to be ashamed of and they are not a distraction to boys. Parents and teachers could use Dresses Coded as a conversation starter about many topics, including bullying, vaping, protesting, and respecting others.

“Sometimes eating cookies with a best friend in the middle of the night is better than talking,” Molly –Dress Coded