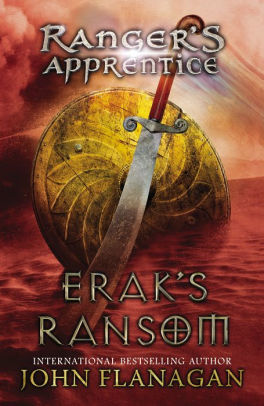 “If you mess things up, don’t try to hide it. Don’t try to rationalize it. Recognize it and admit it and learn from it. We never stop learning, none of us,” Gilan. –Erak’s Ransom

What does it mean to earn the Silver Oakleaf? So few men have done so. For Will, a mere boy and apprentice to the most difficult Ranger to please, that symbol of honor has long seemed out of reach. If he is to ever earn it, he must prove himself in ways he never imagined.

Now, in the wake of Araluens’ uneasy truce with the raiding Skandians, there comes word that the Skandian leader, Erak, has been captured by a desert tribe. The Rangers, along with a small party of warriors, are sent to free him, but the desert is like nothing these warriors have seen before. Strangers in a strange land, they are brutalized by sandstorms, tricked by one tribe that plays by its own rules, and surprisingly befriended by another. Like a mirage, nothing is as it seems. Yet one thing is constant: the bravery of the Rangers.

Erak’s Ransom goes back in time, before the fifth and sixth installments of the series. When Erak is taken captive, the Skandians ask for the Araluens’ help. For the first time ever, Halt, Horace, Will, and Evelyn travel together. The interplay between the characters is interesting. Readers will appreciate seeing how people from different cultures can respectfully work together without having to hide their beliefs.

Like the previous books in the series, the story ends with an epic battle. However, one of the best aspects of Erak’s Ransom is the political negotiating, the clashing of beliefs, and the honor of desert tribes. Even though the story’s plot is complicated and there is a huge cast of characters, readers familiar with the characters will not have difficulty understanding the plot. The Araluens, Skandians, and two desert tribes come together to defeat an evil raiding party. Each group has a different strength, and all contribute to freeing Erak and defeating evil.

Erak’s Ransom is another fast-paced story that readers will not want to put down. Although male friendship is highlighted, Evelyn’s strong personality also comes to the forefront and shows how women can be capable leaders. Erak’s Ransom will leave readers wishing they could sit around the campfire and have a conversation with the Araluens and the Skandians because at this point in the series, they seem like trusted friends.

“If you mess things up, don’t try to hide it. Don’t try to rationalize it. Recognize it and admit it and learn from it. We never stop learning, none of us,” Gilan. –Erak’s Ransom