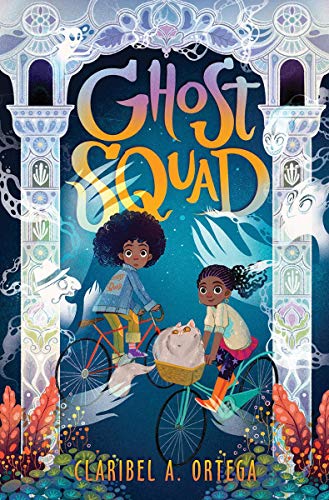 “Bah! Don’t believe everything your teachers recite from their history books. Everyone wants to paint a powerful woman out to be wicked. How do you think witches go their name in the first place, hmm?” Babette. –Ghost Squad

by Claribel A. Ortega

The supernatural has always been a part of Lucely Luna’s life. Her father runs a ghost tour, and her hometown of St. Augustine is known for being the home of Las Brujas Moradas, aka the Purple Coven. And Lucely can see and converse with spirits, notably the spirits of her dead relatives. When her deceased family members aren’t in their human forms, they inhabit the old willow tree in the backyard as firefly spirits. However, her firefly family members recently flickered in and out of view, and then the fireflies began to fade.

Lucely and her friend, Syd, investigate how to revive her deceased family members. After learning more about Las Brujas Moradas, they visit Syd’s grandmother’s shop and steal a spell book that they need to revive Lucely’s family members. But when the two girls recite the spell, they accidentally awaken malicious spirits. The girls fight the ghosts, but all their efforts are for naught. They ask Babette, Sydney’s grandmother, for her help in fighting against the evil ghosts and reversing the curse to save the town and Lucely’s firefly spirits.

The narrative focuses squarely on Lucely’s perspective. This close view allows the reader to understand the ghosts, magic, and Lucely’s personal life. The narrative’s linear structure, mixed with Babette’s conversations and the occasional inclusion of the school setting, makes the explanations about St. Augustine, the magic, and the Luna family history easy to understand. In addition, the Latino culture is on full display throughout the story, mainly through the mannerisms and the Spanish phrases that Lucely’s family members say to each other. Readers will relate to Lucely and Syd’s friendship and empathize with Lucely as she frets over her family members’ safety.

Lucely also learns about responsibility while getting rid of the evil ghosts. She is responsible for awakening the evil spirits, so she fixes her mistake and takes on more accountability for protecting the town. According to Lucely’s grandmother, their family has been “charged with keeping [St. Augustine] and its inhabitants safe.” By the end of the story, Lucely is assured of her identity and purpose in her community, which is an important lesson for younger readers.

Ghost Squad is a story that focuses on family, friendship, and culture. The story has a few slow moments, mostly spent establishing the town and the Dominican Republic and the Latino aspects of the Luna family. St. Augustine has many interesting characters, such as Syd, Babette, and the firefly spirits. Like the firefly spirits, Las Brujas Moradas and the human spirits are some of the many supernatural elements that add interest to St. Augustine. The story is also chock full of pop culture references, such as Harry Potter and the Ghostbusters, which adds a lot of humor. Readers of all ages will enjoy the story for its lessons on responsibility and friendship. Readers who like Ghost Squad by Claribel A. Ortega will also enjoy The Girl Who Drank the Moon by Kelly Barnhill and Anya’s Ghost by Vera Brosgol.

“Bah! Don’t believe everything your teachers recite from their history books. Everyone wants to paint a powerful woman out to be wicked. How do you think witches go their name in the first place, hmm?” Babette. –Ghost Squad