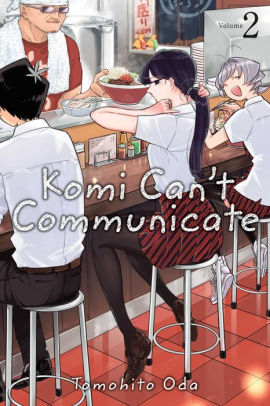 “I shouldn’t have kidnapped you. I should’ve just threatened you to keep you away. And I said mean things. I meant every word of it, but I shouldn’t have said it out loud,” Agari. –Komi Can’t Communicate

Socially anxious high school student Shoko Komi’s greatest dream is to make some friends, but everyone at school mistakes her crippling social anxiety for cool reserve. Luckily, she meets Tadano, a timid wallflower who decides to step out of his comfort zone in order to help her achieve her goal of making 100 friends.

It’s time for the national health exam at Itan High, and the excitement of eye exams and height measurements has fanned the flames of competition in the heart of Makeru Yadano. She’s determined to beat the class idol, Komi, in the health test. Komi’s total obliviousness to their impassioned duel just feeds Makeru’s determination. As the epic battle heats up, how will Komi handle her first rival when she’s barely made her first friends?

Much of the time Komi seems to be in her own world and doesn’t notice those around her. For example, at the beginning of the story, one classmate wants to compete with Komi on the physical fitness test. However, Komi doesn’t even realize the classmate is trying to beat her during the races and other activities. Even though Komi has social anxieties and doesn’t talk to anyone, many of Komi’s classmates idolize her and consider her a “goddess.”

Several of the characters are odd. For example, one classmate, Agari, acts as if she is Komi’s dog. Another classmate, Yamai, desperately wants to meet Komi, so she threatens Komi’s friend, Osana. After Osana agrees to introduce Komi to Yamai, the situation becomes even stranger. Yamai kidnaps Tadano, binds him to a chair, and puts tape over his mouth. Later that day, Osana and Komi go to Yamai’s house where they discover Tadano trapped in a closet. Despite this, Komi still wants to be friends with Yamai.

Komi Can’t Communicate Volume 2 shows Komi’s growth from a girl with no friends, to one who is beginning to communicate and has two friends. Even though Komi communicates by writing on a piece of paper, she does stand up for Tadano. Tadano is a bright spot in the story because he truly wants Komi to form friendships, and he pushes her to try new things. However, one drawback of Komi’s friends is that they all focus on her beauty.

The black and white illustrations are adorable and portray the socially awkward girl and her interactions with others with humor. Each page has 1 to 11 simple sentences which appear in quote boxes. Square boxes are also used to show characters and general information. The illustrations help show Komi’s nervousness by showing her tremble.

Even though Komi Can’t Communicate Volume 2 has some strange events, the story will resonate with high school students who are insecure. As Komi begins to communicate, she also begins to act like a normal teenager by going to the mall and eating at a restaurant with her friends. Komi Can’t Communicate Volume 2 will entertain readers, even though it lacks the depth of Volume One. Readers will be curious to find out what happens with Komi’s new friend Yamai in Volume Three.

“I shouldn’t have kidnapped you. I should’ve just threatened you to keep you away. And I said mean things. I meant every word of it, but I shouldn’t have said it out loud,” Agari. –Komi Can’t Communicate