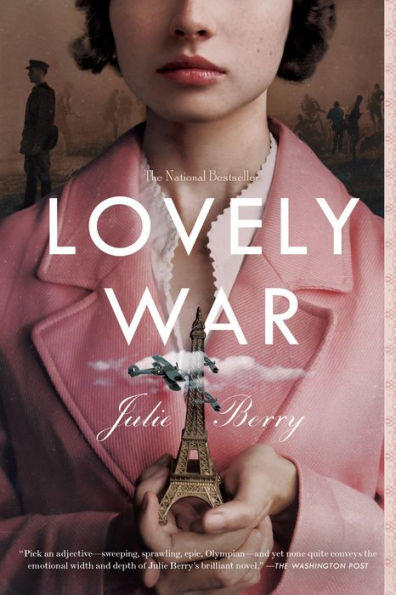 “Let them start their dreadful wars, let destruction rain down, and let plague sweep through, but I will still be here, doing my work, holding humankind together with love like this,” Aphrodite. Lovely War

In a hotel room in Manhattan in the midst of World War II, the Greek gods Aphrodite and Ares are caught in an affair by Aphrodite’s husband, Hephaestus. Hoping to understand Love’s attraction to War, Hephaestus puts Aphrodite on trial. Her defense is to tell the tale of one of her greatest successes, the intersecting love stories of Hazel Windicott and James Alderidge, and of Aubrey Edwards and Colette Fournier. Aphrodite’s witnesses are Ares (god of war), Apollo (god of music), and Hades (god of death). Each contributes their own different, but overlapping, perspectives to the proceedings.

The story begins as piano player Hazel and soldier James meet at a parish dance and fall into instant, dizzying love, only to be separated three days later when James is sent to the front. Desperate to distract herself from anxiety about her soldier’s well-being, Hazel joins the YMCA where she meets Colette, a singer who lost her whole family in an attack on her home in Belgium. There, they happen upon ragtime musician Aubrey, a Black soldier who desires to make a name for himself on stage and on the battlefield. Aubrey and Colette bond over their music and realize their affections go beyond an appreciation for each other’s talents.

While the story addresses dark and violent subject matter due to its historical period, the frame narrative allows for light moments as well. The banter among the gods, and their respective belief that their part of the story is the most memorable, allows the mood to lift as needed. The darker moments hold meaning within the larger narrative and the smallest joys are heralded as gifts from the gods.

The human characters hold their own amongst their immortal narrators. Each character is likable and humorous in his/her own way. Over the course of the war, Hazel emerges from her meek demeanor, learning to stand for what she sees is right, while not losing her innocence and goodness of heart. James is goofy and sincere, making his experience in combat all the more tragic, as he must reconcile that what he does on the battlefield does not have to mean a loss of himself. Colette is strong-willed and a fierce defender of her friends, though internally she fears that anyone she loves is destined to die. She opens up, however, to the charming dreamer Aubrey. Aubrey’s experiences with racial violence show that the enemy to their happiness is not only the German soldiers they encounter on the battlefield but also those who perpetrate violence and discrimination against black Americans within their own neighborhoods and war camps.

Teenage readers who enjoy romance, Greek mythology, and historical fiction may enjoy this book. It is recommended that readers proceed carefully, as the book does address racism and racial violence as well as the terrors and destruction of war. Despite the hate and violence which surround them, the couples find their way back to love amidst it all. Their fragility as mortals in wartime allows for precious love to shine, as even the impermeable gods come to admire. After Aphrodite reminds Hephaestus that the mortals die, he responds, “They do. But the lucky ones live first. . . The luckiest ones spend time with you.”

“Let them start their dreadful wars, let destruction rain down, and let plague sweep through, but I will still be here, doing my work, holding humankind together with love like this,” Aphrodite. Lovely War