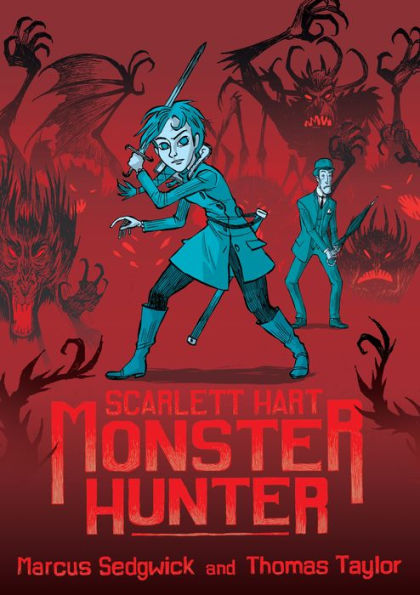 “The only thing that stinks around here is your attitudes! Do you think your parents defeated the White Phantom or the Vampire Queen of English Marsh by sitting around complaining?” Mrs. White. –Scarlett Hart Monster Hunter

Scarlett Hart isn’t afraid of monsters. As the orphaned daughter of two legendary monster hunters, she is prepared to rid the entire city of monsters! The only problem is that the Royal Academy for the Pursuit and Eradication of Zoological Eccentricities says she’s too young to fight perilous horrors. But that doesn’t stop Scarlett and her trusty butler. They fight mummies, a horrid hound, and save the city from a monster attack.

Scarlett is a plucky heroine who isn’t afraid to fight. With the help of her butler, Napoleon, Scarlett is able to keep her monster hunting a secret. However, her parents’ rival, Count Stankovic, wants all of the monster hunting glory for himself. The Count will try anything to get Scarlett out of the way. Every time Scarlett turns around, the Count is hiding in the shadows, waiting for his chance to get proof that Scarlett is breaking the law. When a group of monsters starts mysteriously manifesting, Scarlett knows she has to risk breaking the rules and being put in jail. She will do whatever it takes to save the city.

Scarlett goes around the city fighting sea monsters, fire-breathing monsters, and gargoyles. Even though the monsters always meet their demise—sometimes in creative ways—the illustrations keep out the bloody gore. Most of the story revolves around battling monsters and the Count. However, Sedgwick includes enough detail and family background to give the story a little depth.

Scarlett Hart Monster Hunter is an entertaining story with elements of steampunk. Even though the action revolves around monsters, no one is seriously injured. The story has many elements that will entertain middle school readers, like the string of funny, creative insults Scarlett uses when referring to the Count. The illustrations use many onomatopoeias, such as, “creak, fazaza, tweak, phut, phut, sputter.” The cartoon-like illustrations use shades of brown to mimic the darker tone of the story.

Readers who love monster fighting fun and have read The Last Kids on Earth series will miss the humor and friendship that is lacking in Scarlett Hart Monster Hunter. Despite this, Scarlett Hart Monster Hunter is a fast-paced story that is worth spending an afternoon reading. However, readers may want to make sure they aren’t alone in the house when they decide to jump into Scarlett’s spooky world. Monster-loving graphic novel fans should also add Ghostopolis by Doug TenNapel to their reading list.

“The only thing that stinks around here is your attitudes! Do you think your parents defeated the White Phantom or the Vampire Queen of English Marsh by sitting around complaining?” Mrs. White. –Scarlett Hart Monster Hunter