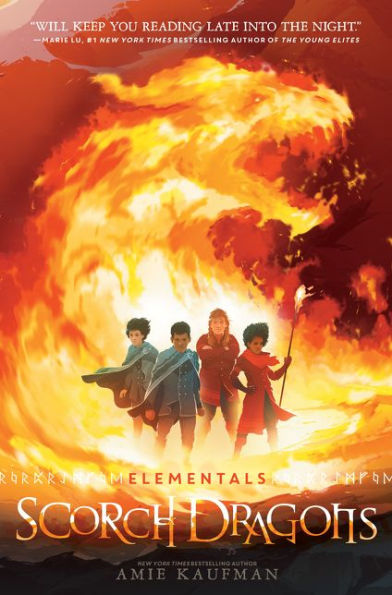 Other books by Amie Kaufman

“Stories are powerful. They can teach people, change their minds, make them laugh, or cry, or remember, or forget,” Ellukka. – Scorch Dragons

After a battle between Ice Wolves and Scorch Dragons, Anders and his twin sister have finally been reunited. But some still doubt that the twins are truly siblings. While the dragons have embraced Rayna, many want the wolves Anders and Lisabeth to leave the mountain stronghold of Drekhelm, because dragons think all wolves are a threat.

For now, Lief, the leader of the dragons, has promised to keep the two wolves safe. But when the wolf pack begins to use the Snowstone, the temperature starts to drop all over Vallen. With the use of the Snowstone, the wolves can weaken the dragons before they attack. Every dragon is in danger. As the dragons debate on the best course of action, Anders and his friends decide they must act in the hopes of bringing peace.

The second book in the Elemental series still focuses on Anders but adds new, interesting characters. As Anders learns about the dragons’ world, he discovers that the stories of the dragons were not completely true. Instead, the wolves’ stories only focused on facts that portrayed the Ice Wolves in a positive light, and they left out important information that would have helped people understand why the dragons “attacked.” Throughout the story, Anders and his friends learn to put away past misconceptions and work together for the good of all—dragons and wolves.

Scorch Dragons introduces the dragon’s world and gives Anders a new perspective. However, much of the story focuses on Anders and Rayna proving that they are truly siblings and using this knowledge to find the pieces of the Sun Scepter, which has been hidden in four different places. The search lacks suspense due to overly long descriptions of scenery as well as the easy manner in which the pieces are found.

Readers who enjoyed Ice Wolves will already have a connection with the characters and will want to know the outcome. Because of the advanced vocabulary, long descriptions, and a large cast of characters, Scorch Dragons is best suited for strong readers. This character-driven story shows how unlikely friends can work together for the good of all. Although the story ends with an epic battle between the Ice Wolves and the Scorch Dragons, readers will have to work to make it through the slower middle part of the story. Still, fantasy fans will love flying into a book where dragons, wolves, and magic meld in a world of constant danger.

Other books by Amie Kaufman

“Stories are powerful. They can teach people, change their minds, make them laugh, or cry, or remember, or forget,” Ellukka. – Scorch Dragons