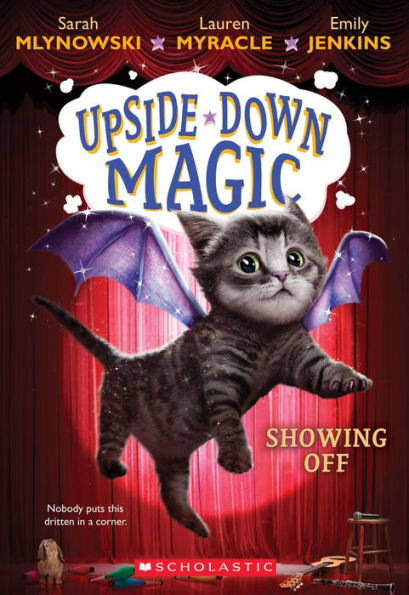 “With magic like mine, I’ve gotten used to people not wanting me around. So it was easy to believe you weren’t really my friend,” Pepper. —Showing Off

Nory and the other students who have upside down magic struggle with fitting in. Some people, including Nory’s father, don’t think upside magic should be used. But with the school’s big show coming up, each class must prepare a program.

Nory isn’t sure she should use her magic at all. She’s thinking about sitting on the sidelines. Her friend Pepper is worried that her talent—scaring animals—will cause problems. With the help of a talking rabbit and a caring teacher, can the kids in the upside magic classroom figure out how to use their wacky magic to show others their abilities?

Showing Off has relatable characters who struggle with learning to accept their differences. Many readers will relate to Nory, who wants her father’s love and acceptance. Even though Nory wants to use her upside down magic to impress her father, she is willing to put her friends’ needs above her own.

Nory and her classmates end up in hilarious situations because of their magic. Even though the story revolves around each character’s magical talents, the story does not contain spells or portray magic in a realistic way. Instead, the story focuses on how many of the characters feel like misfits. In the end, several of the characters realize that their magic can be used in positive ways.

The long passages of text and the lack of illustrations may discourage some readers. However, the story will engage readers with the unique characters, the hilarious mishaps, and the struggle to fit. Showing Off also uses fun made-up words such as zamboozle and zwingo. Readers will learn that friends don’t make friends feel stupid as well as the importance of apologizing.

Even though Showing Off is the third installment of the Upside Magic Series, readers do not have to read previous books. For proficient readers looking for a dose of magic and silly disasters, Showing Off would make a good addition to the reading list.

“With magic like mine, I’ve gotten used to people not wanting me around. So it was easy to believe you weren’t really my friend,” Pepper. —Showing Off